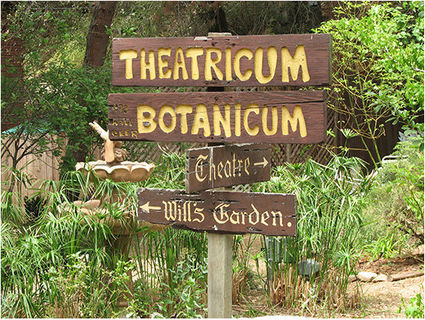 Will Geer's Theatricum Botanicum returns to live performances with outdoor 2021 summer SeasonTheatricum Botanicum returns to live performance at its unique and stunning outdoor amphitheater in Topanga with a summer season of three plays July 10 through Nov. 7. Tickets to Will Geer's Theatricum Botanicum 2021 Repertory Season, sponsored by the S. Mark Taper Foundation, go on sale June 1 at theatricum.com. Best known for presenting lively and engaging renditions of the works of William Shakespeare, Theatricum will open the season on Saturday, July 10 at 7:30 p.m. with a fresh look at Julius Caesar. Director Ellen Geer views Shakespeare's iconic thriller about power, politics and the elusive nature of truth through a different lens, telling the tale from the vantage point of the Soothsayer. Audiences yearning for live theater after a year-long drought can satisfy their cravings by returning the next day, Sunday, July 11 at 4 p.m., for the opening of A Midsummer Night's Dream. This summer, Theatricum offers a new take on its signature production, infusing the Bard's beautiful language with music and song to heighten the pleasure.

On Saturday, July 31 at 7:30 p.m., Theatricum is excited to introduce a world premiere play to the rotation. The Last, Best Small Town by local Latine playwright John Guerra is a tale of small town America set in the nearby town of Fillmore - the self-proclaimed "Last, Best Small Town in Southern California." All three productions will play in repertory through Nov. 7. Unlike most theaters in the L.A. area that stage continuous runs of a single play, Theatricum, using a company of actors, will perform each of the plays in repertory, making it possible to see all three plays in a single summer weekend. In addition to theater, Theatricum offers artistic and educational satellite programming throughout the season. An in-person concert by singer-songwriter Inara George and her band (Barbara Gruska, Gabe Noel, Samantha Sidley and Wendy Wang) has already been announced for June 6 at 2 p.m. The company's annual Under the Oaks series of music and performance is currently being scheduled.

Theatricum Botanicum has been named "One of the 50 Coolest Places in Los Angeles" by Buzz magazine, "One of Southern California's most beguiling theater experiences" by Sunset magazine, and "Best Theater in the Woods" by the LA Weekly. "The enchantment of a midsummer night at Theatricum Botanicum [makes it] crystal clear why audiences have been driving up into the hills since Theatricum's maiden season way back in 1973. summer Shakespeare doesn't get any better than this," writes StageSceneLA. Says Los Angeles magazine, "The amphitheater feels like a Lilliputian Hollywood Bowl, with pre-show picnics and puffy seat cushions, yet we were close enough to see the stitching on the performers costumes. Grab a blanket and a bottle and head for the hills."

The beginnings of Theatricum Botanicum can be traced to the early 1950s when Will Geer, a victim of the McCarthy era Hollywood blacklist (before he became known as the beloved Grandpa on The Waltons), opened a theater for blacklisted actors and folk singers on his property in Topanga. Friends such as Ford Rainey, John Randolph and Woody Guthrie joined him on the dirt stage for vigorous performances and inspired grassroots activism, while the audiences sat on railroad ties. Today, two outdoor amphitheaters are situated in the natural canyon ravine, where audiences are able to relax and enjoy the wilderness during an afternoon or evening's performance. Theatricum is the recipient of multiple awards, including the Margaret Harford Award for "sustained excellence," which is the Los Angeles Drama Critics Circle's highest honor.

Theatricum Botanicum continues its campaign to "Go Green," completing the Topanga Creek revitalization project headed by Debbie Sharpton. All nonnative plants have been removed from the grounds with the help of many volunteers, and native plants have been planted. Visitors will be greeted by a mural of a red-tailed hawk and signage that confirms that nature and art live together. Theatricum is committed to being an active defender of the planet and a warrior against climate change.

Will Geer's Theatricum Botanicum is located at 1419 North Topanga Canyon Blvd. in Topanga, midway between Pacific Coast Highway and the Ventura (101) Freeway. The amphitheaters are terraced into the hillside, so audience members are advised to dress casually (warmly for evenings) and bring cushions for bench seating. Seating will remain socially distanced and masks required as dictated by L.A. County guidelines on the day of each event. For tickets, subscriptions, group discounts and a full schedule of theater, music and family entertainment, call 310-455-3723 or go to theatricum.com.