"If you were doing your job, I would never have been in Venice. But I have to be there now, because lives are at stake." 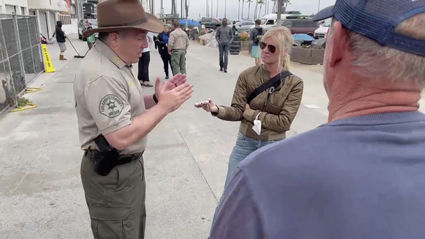 "Today I visited the Venice Boardwalk again to view the failures of local politicians in regard to the homeless crisis," Villanueva tweeted. "Tomorrow the @LASDHQ Homeless Outreach Services Team (HOST) will be assessing Venice in order to triage the crisis and develop an action plan to compassionately offer services while employing common sense in the regulation of public space within Los Angeles County."

Villanueva's announcement pleased some local residents on Social Media. Locals are concerned about increasing crime in Venice. In an incident Monday, police arrested a homeless woman with a knife as she tried to disrupt an event by mayoral candidate Joe Buscaino, a Democrat who is currently president pro tem of the LA City Council.

Mayoral candidate Joe Buscaino spoke about his "Plan For A Safer Los Angeles" to address the homelessness crisis in the city, as homeless encampments of unhoused people across the city remain a key issue for local residents.

Westside City Councilman Mike Bonin called Villanueva's actions simply political theater. "Any involvement from Villanueva is troubling, especially for people concerned with civil rights. Read what the Civilian Oversight Commission said about him and LASD. He threatened progress on reforms designed to enhance accountability for deputy misconduct. The state of California has launched a civil rights investigation into his department over excessive force, retaliation, and misconduct," Bonin tweeted.

"In Venice, we're working to marshall resources to offer housing and services to hundreds of people living on the streets. Villanueva hasn't offered actual help," Bonin continued. "This is a serious crisis. We need people interested in solving it, not exploiting it." 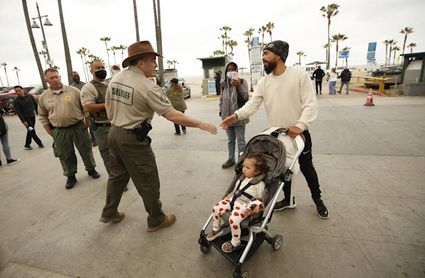 Later, Villanueva told a reporter to tell Bonin, "If you were doing your job, I would never have been in Venice. But I have to be there now, because lives are at stake."

Bonin became a lightning rod for criticism in May, when he suggested using beach parking lots in at Will Rogers State Beach, as homeless encampments. "I didn't work 12 hours a day, six days a week for years" one Pacific Palisades resident told the news media "so I could buy into the most expensive real estate in the United States, and then share it with homeless people."

While the Venice Boardwalk is ordinarily the bailiwick of the Los Angeles Police Department, Villanueva has said anywhere a public health problem arises, he and the LASD have an obligation to respond.