Rebel with a Cause: Parents, Alums in Last Minute Fight to Save Historic History Building at Santa Monica High School

Meanwhile, SMMUSD Requests input on other historic buildings they plan to demolish and replace with characterless modern buildings. 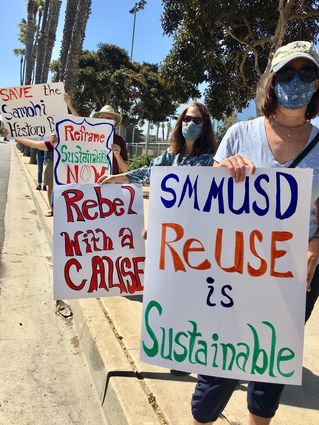 Rebel with a Cause: Parents and alumnae rally to support a lost cause: Preserving the history building at SamoHi

James Dean walked down the hallways of the History Building at santa monica high school in Rebel Without a Cause. Protestors at SamoHi last Saturday tried a last minute effort to save the building.

The History building was originally constructed in 1913, but largely rebuilt as a WPA project in the 1930's. The building is undergoing asbestos abatement. Which means the contractor awarded the $200 million contract to replace the historic structure with a "state of the art Career Building," is preparing to demolish the building. After all, it's in the way of progress, and in the way of some already rich folks connected enough to SMMUSD to be awarded the contracts, to become yet richer.

Separately the SMMUSD board, which is facing recall elections from angry alumnae, announced that it would make an effort to catalog historic buildings on other campuses. Too little too late, guys. You have egg all over your faces for allowing SamoHi to lose its signature building during the pandemic, when no one could attend public meetings during the approval process.

The press release as rewritten by our staff follows. It is laughably titled: "SMMUSD Requests Community Input on 'Historic Properties' on Campuses

The Santa Monica-Malibu Unified School District has announced it will hold a series of online community meetings on June 21 and June 22 to develop the "historic resource inventories" at its elementary and middle schools.

At these meetings, the consultants will ask for the community's input and comments on the buildings, artwork and other features of the campus that might be a historical resource, district officials said. "This is an opportunity to guide the investigation," officials added. 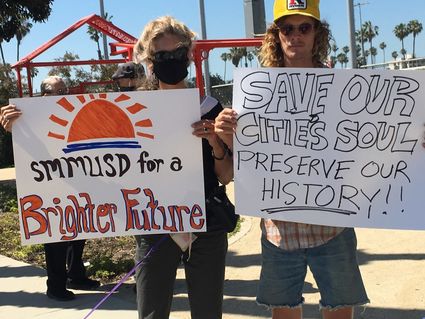 Parents and alumnae rally to support a lost cause: Preserving the history building at SamoHi

According to SMMUSD, the consultant's recommendations will be made public for review and another round of community meetings will be scheduled later this year to receive feedback on the historical resource inventory reports. Following revisions, the Board of Education will review and adopt the reports.

The online presentations will be held as follows: