An exhibition in conversation with Alison M. Gingeras 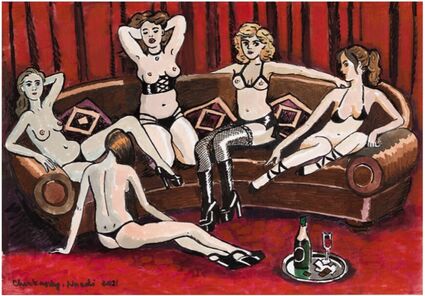 Beginning Thursday, July 22, Fort Gansevoort will present Women Who Work, a solo exhibition of works on paper by Zoya Cherkassky. This online presentation is accompanied by a conversation between the artist and curator Alison M. Gingeras.

Born in Kiev in 1976, Cherkassky grew up in the Soviet Union before migrating to Israel in 1991. Her personal experiences and the visual landscape of her youth appear as common themes throughout her work. For Women Who Work, the artist takes a detour to explore the topic of contemporary female sex work. The featured series of new drawings was inspired by the horrific story of Viktor Mokhov, better known as the "Skopin Maniac." After abducting two teenage girls in 2000, whom he raped and held hostage in a subterranean bunker for nearly 4 years, Mokhov served 17 years in a Russian prison. Upon his release this year, the Russian media treated Mokhov as a celebrity, much to the chagrin of human rights activists across the globe.

Using this event as a springboard for the drawings on view, Cherkassky also draws influence from a genre of dramatic Soviet films, such as Intergirl (1989), in which female prostitutes appear as ancillary characters, rarely integral to the plot but memorable for the consistency of their role as chattel. The artist's works on paper also reference real life Eastern European sex workers, whom she has observed outside a brothel visible from the windows of her studio in Tel Aviv and in YouTube videos that feature groups of young Eastern European sex workers living in quotidian communal settings where they also take clients. In these supposedly candid videos, the women on screen are seemingly caught unaware and subsequently shamed by the videographer for their role in illicit sexual behavior.