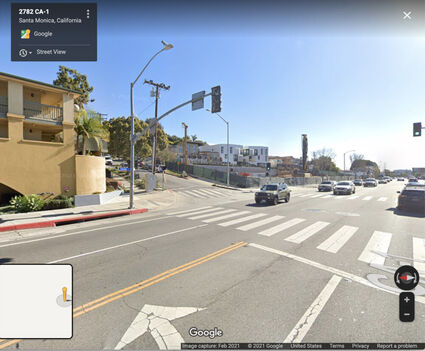 A 43-year-old homeless man was arrested this week after he allegedly chased another man through traffic along Lincoln Boulevard while brandishing two knives, local police said.

The incident occurred at 2:10 on July 3 in the 2800 block of Lincoln Boulevard, according to Santa Monica Police Department.

On patrol in the area, an officer saw multiple vehicles slam on their brakes at the intersection of Lincoln Boulevard and Hill Street, SMPD said in a press release. "The officer observed a male victim being chased by another subject across Lincoln Blvd, swerving in and out of the stopped vehicles."

"The male suspect was running with two large knives, one in each hand, still chasing the victim," police said.  "The officer immediately intervened and ordered the suspect to drop the weapons.  The suspect complied; however, the officer located a third knife in the suspect's waistband when taking him into custody."

Transported to Santa Monica Jail was Robert Smith, a 43-year-old man experiencing homelessness. He was booked on charges of assault with a deadly weapon, brandishing, carrying a concealed weapon and criminal threats. The City Attorney has filed all charges, police said.

Anyone with any additional information pertaining to this incident or subject is strongly encouraged to contact the Criminal Investigations Division at 310-458-8451 or the Santa Monica Police Department's Watch Commander at 310-458-8427.