Brawl between wafflehouse employee and a customer went viral on Twitter, where it had 2 million hits Monday morning.

A fight between a Waffle House cook in Atlanta Georgia, and a customer has gone viral on social media. "Waffle House on Buford Hwy was turnt Waffle" tweeted @atluncensored on 9/5/21, in the original tweet. People on Twitter note that this is not at all the first time this scenario, a fight at the Waffle House chain, has arisen.

Both combatants were African American men. Before punches were thrown, two African American women are seen pleading with the customer that "we're better than that," meaning better than resorting to fists and violence. (There have been other recent videotaped Waffle House brawls involving only white people. So this "fight club" does not discriminate on the basis of race. Anyone can behave badly). 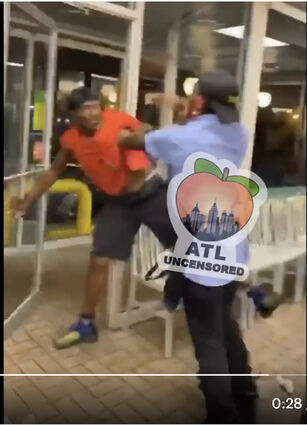 Video of the fight was originally tweeted by @atluncensored. Needless to say, the reaction on Social Media was swift. "Never fight a restaurant employee in a restaurant. Them floors is slippery and the employee got that Shoes For Crews super grip." Tweeted One Turnt Man.

Many tweeting pointed out that fights between customers and employees of Waffle Houses have happened before. "Waffle house employees are the airline flight attendants of the restaurant world," tweeted One Tuff Chick.

"When stuff like this happen why don't y'all just take the whole plate and leave?" tweeted Chka-Chka, Slim Shady

Waffle House, Inc. is an American restaurant chain with 2,100 locations in 25 states in the United States. Most of the locations are in the South, where the chain is a regional cultural icon. Waffle House is headquartered in Norcross, Georgia, in the Atlanta metropolitan area.

Was it necessary to point out the color of the assailants? It’s obvious from the picture. Would you have done this if they were Caucasian? Just asking!!! Why does everything have to have a race ticket with it?? Will the world/people ever change? God is warning people know. Get the message people of all “races”.🙏🏽💕🙌🏾

The mention of color maybe because of history. https://www.newsbreakapp.com/n/0ba90l9O?share_id=eyJ1c2VyaWQiOjE0NTY1MDI4MCwiZG9jX2lkIjoiMGJhOTBsOU8iLCJ0aW1lc3RhbXAiOjE2MzE2NTQzMjAwMDB9&share_destination_id=MTQ1NjUwMjgwLTE2MzE2NTQzMjMxNTA=&s=a7&pd=09r8I4Xa&hl=en_US

Why are you so focused on reporting the color of the people involved? You can clearly see that they were. I don't believe you would've stressed the color if they weren't.