A Giraffe Strolls Down Santa Monica Beach As a Gorilla Throws an Egg At Larry Elder on Venice Beach.

This week was a regular safari at Westside Beaches. You can't make this stuff up, right? 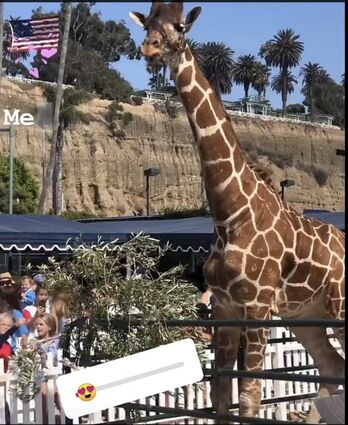 The Jonathan Club on Santa Monica Beach hired a Giraffe named Jax for their private Labor Day event.  The animal was intended to entertain kids, but ended up going viral on Twitter after being "spotted" by stunned beachgoers.  These included KTTV's Bill Melugin, who shot some viral video.

When photographed being walked down the beach, the animal was apparently taking a break from his duties entertaining children at the J-Clubs Labor Day kids party.

Twitter users were divided over hosting the animal at the private event in such hot weather. "I'm going to stick my neck out and say that looks like a giraffe," said David Never a True Word. 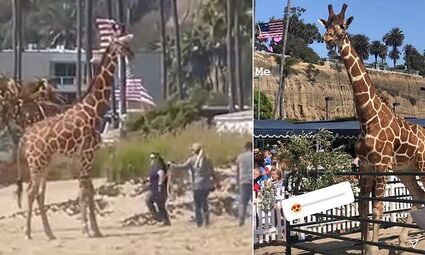 A private party using traditional circus animals for entertainment in the Hollywood Hills provoked a Los Angeles City Councilman at the time, David Ryu, to create broad, far-reaching legislation prohibiting the use of "wild animals" for "entertainment." The law defined any "Non-domesticated" animal as a "wild animal," thus including pet birds, small reptiles, and turtles. "Entertainment" includes conservation and education presentations - but, oddly enough, not animal use in motion pictures. Due to one party in the Hollywood Hills, education groups may not bring live animals to children at schools or science fairs in order to educate them about the importance of responsible pet keeping and conservation unless they pay a fee (for which the city does nothing in return). The fee is too high for most education groups to afford.

David Ryu was defeated by a challenger in the November 2020 election.

Education groups who want to give presentations in Santa Monica to teach real respect for wild animals will be fortunate if Jax the giraffe and those who hired him do not create a similar situation here.