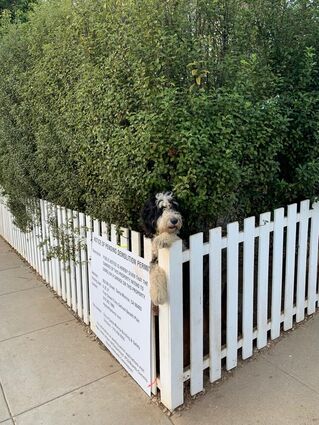 A dog peers over a fence of a single family home, which is set to be demolished and replaced by multi unit housing.

The California State Legislature has approved a bill which "will ensure cities and counties are adequately re-zoning to meet their housing needs" – a move many critics and homeowners say may lead to the elimination of the R-1 (single-family) zones in their municipalities.

AB 1398 – approved by the legislature last week – requires local agencies that fail to adopt a legally compliant housing element to properly rezone within one year to meet its affordable housing needs.

"The housing element planning process is a key building block in the state's policies to foster the production of affordable housing and address homelessness," said Assembly member Richard Bloom, the bill's author. "Unfortunately, there have been instances where cities deliberately adopt faulty housing elements to avoid building their fair share of housing."

Cities and counties are currently mandated to submit to the state a housing element update that will guide their housing production and preservation for the next eight years.

If the jurisdictions that fail to adopt a housing element within 120 days of the statutory deadline, then they are required to adopt a revised housing element every four years. However, Bloom said, the penalty for non-compliance with state housing deadlines has proven ineffective and has led to local agencies adopting deficient housing elements months with no consequences.

"Jurisdictions that fail to adopt a HCD-compliant housing element within 120 days of the statutory deadline will have one year to complete the required rezoning, instead of the current three years and 120 days," said Bloom. "This bill helps ensure that all cities and counties are doing their part in helping address the housing crisis and spurring production."

In the past six months, many cities have considered rezoning selected portions of R-1 (single-family) neighborhoods to increase density and meet the affordable housing needs as well as redress "past exclusionary zoning practices," triggering a barrage of criticism and push back from homeowners.

Many homeowner groups banded together to fight the "up-zoning scheme will not create affordable housing nor alleviate racial inequity." They maintained their neighborhoods are diverse and the Fair Housing laws protect people from discrimination.

"As the housing crisis grows in California," said Bloom, "it is critical that every local government adopt a plan that meets the requirements of state law and that they carry out necessary rezones to make land available for the production of housing, particularly higher-density zoned land that can accommodate housing affordable to lower-income households."

"This bill sets the right incentives to do that critical planning," he added.

AB 1398 is headed to the Governor's office for his signature.

Question: If we replace single family neighborhoods with more density and affordable housing, what happens next? Who pays for the losses when the next pandemic hits? How are property owners going to pay for housing services, let alone municipal infrastructure to support this increase in density? And where are the jobs for all of these newly housed people? I get it that state and federal funding will not be available to cities that do not comply.... so this means State budgets, fed budgets... so this means TAX PAYERS at some point... are those living in affordable units contributing to the inevitable TAX Bill? Or are we simply downgrading everyone?