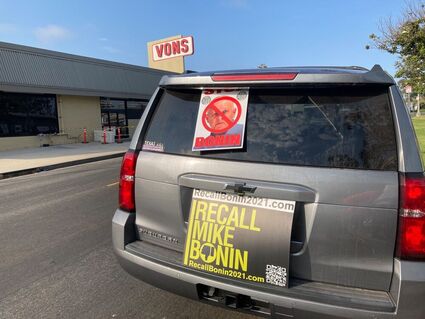 After Mike Bonin released the home addresses of the leaders of an effort to recall him, the home of one was vandalized yesterday

September 20, 2021 - In an email to constituents, Los Angeles City Councilmember Mike Bonin suggested the city buy up motels and even office buildings to turn them into "housing with services." Bonin went on to claim it would be a good idea for the city to become a major land and property owner, creating what he calls "social housing."

Bonin believes government landlordship is merely an "expansion," a logical next step from the initiative taken over the summer to give motel vouchers to vagrants camping on the Venice boardwalk.

He is either very stupid or very evil.

Handing out motel vouchers is nothing like the government becoming a major (or even minor) residential landowner. A motel voucher gives an indigent person the ability to have a place to stay for however long the money holds out. Unless the vouchers are given to multiple vagrants so they take over the entire motel (which actually is the first step in Bonin's master plan), this system does not in any significant way disrupt market forces or destroy private incentives for improvement and growth.

Government housing ownership completely disrupts market forces that motivate landlords to maintain and improve property. It destroys the incentive of private individuals to work and earn goods, like housing in nice neighborhoods, they would like to enjoy.

What Bonin is proposing is public housing, and he knows it. Public housing began during the Great Depression in the 1930s and did not take long to earn a reputation for crime, poor maintenance, drug use and general squalor. Many have since been demolished. It was so bad that California instituted laws requiring a public vote to approve the construction of any new public housing.

But, no! Bonin says. What he is proposing, housing managed by the government and/or a non-profit organization, wouldn't be the same at all! That old form of public housing "suffered from under-investment, poor design, segregation, and lack of political support."

He is either lying or has no brain. That old form of public housing suffered from a lack of investment by the residents, too many of whom were low-lifes with no intention of earning an honest income. It suffered from lack of consequences to the landlord, who was not paid by the residents. Any new form of public housing, even if rebranded as "social housing," as Bonin calls it, would have the exact same fatal flaws. 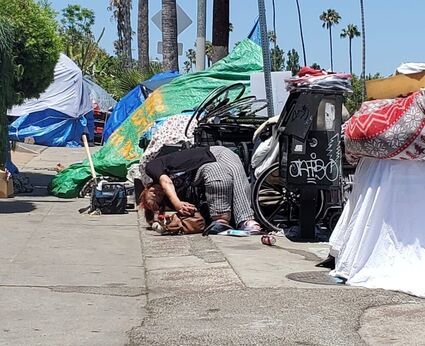 Photo taken July 29 in Mike Bonin's district. Does this individual look like he could handle the responsibility of his own apartment?

Since Bonin does not even understand (or refuses to acknowledge) these flaws, his recipe for solving them won't work: "mixed-income, adequately served by public transportation, has access to amenities and shops, located and regulated to deter discrimination, and self-financing after initial public investment, with tenants paying rents on a sliding scale." None of these elements changes the incentives of both landlord and tenant, which are grossly distorted and even reversed when tenants are not paying adequate compensation to landlords who do not have to earn a profit from the interaction.

Thanks to Mike Bonin, Los Angeles city staff have been directed to explore options for creating public housing and "legal or electoral steps required to remove caps on public housing."

Meanwhile, he looks forward to buying up properties his own policies helped distress through eviction moratoriums, travel bans, and other pandemic lockdown orders. He has either a grossly subpar intellect or a highly mendacious character. Take your pick.