Smoke Turns Sun and Moon Red Over Santa Monica From Fires in N. and Central California

Hundreds of square miles of California experienced red skies on Thursday and Friday, as heavy smoke travelled hundreds of miles 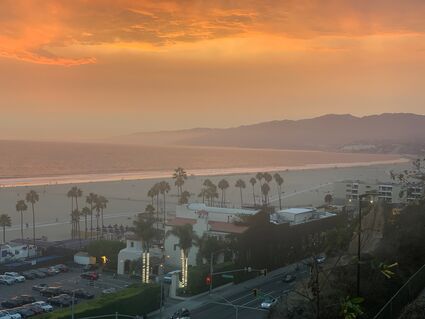 Smoke can travel hundreds of miles in the upper atmosphere, as it did this week. Smoke lingering in the air from Northern and Central California turned skies red all over Southern California on Thursday and Friday.

An orange sun and a red moon were visible in the skies. Numerous photos were posted to social media, including many by me. Calls were made to police and fire, and they explained to concerned residents that there was no fire within 300 miles of Santa Monica.

The National Weather Service said the smoke would ameliorate on Saturday 9/25. It was also reportedly visible in Riverside and San Bernardino Counties.

"The active, large, Windy and KNPC Complex fires have been producing a significant amount of smoke, which before today was 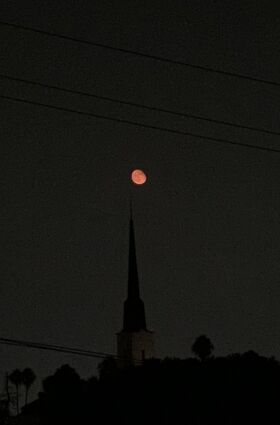 confined to the San Joaquin Valley," The release from the NWS said. "Today, upper level flow shifted to the north/northeast, pushing elevated smoke into much of the forecast area. This smoke settled in the deserts this afternoon, causing reduced visibilities."

"Starting tomorrow night and into the weekend, the smoke is gonna start to push off to the west," Adam Roser, a meteorologist with the NWS in San Diego, told TV station KTLA. "So really it's only going to be around for another 24 to 36 hours, and then we should be kind of good to go."

"[What] makes this kind of different is that these fires are generally closer to us, and all of that smoke is very thick," Roser said. "So that's why we're kind of seeing the darker smokier skies, versus just a hazy sky."