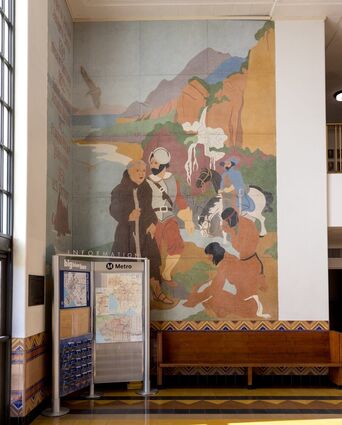 10/8/21: As Columbus Day becomes Indigenous People's Day: On the holiday formerly known as Columbus Day, new attempts to remove the murals from city hall are afoot.

"On September 28th, City Council moved forward on assigning the Landmarks Commission," The City's landmark commission posted on 9/30 on Facebook, "the responsibility of interpreting and contextualizing the City Hall murals, supported by an ad hoc Council committee consisting of Oscar De La Torre and Christine Parra."

"On May 11, 2021, City Council voted 6-1 to cover the historic mural in City Hall as part of its efforts to eradicate racial injustice in Santa Monica. The mural depicts Native Americans at a natural spring and the arrival of a Spanish monk and soldier in the 18th century," posted the Santa Monica Conservancy.

"But rather than eliminate or cover the mural, what is needed are interpretative explanations alongside the City Hall artwork that place it in its historic context while engaging with issues of racial and social justice. The mural is an opportunity to educate our community about the original Native residents of the region, the founding of Santa Monica, the unfolding of California history in which Native Americans were decimated and how this history continues to impact our city and state."

"If we are to tell the whole stories of our communities, then we must preserve and educate rather than erase or hide our history."

Some people find the murals offensive. What's the problem exactly?

An excerpt from an article by Zoe Muntaner follows. It's entitled: Wellbeing: What's Art Got To Do With It? By: Zoë Muntaner, Chief Compassion Officer - Compassionate Santa Monica

Santa Monica City Hall walls feature murals documenting the city's and the state's history. Stanton Macdonald-Wright (1890-1973) created one of the most extensive mural cycles in Southern California at the Santa Monica Public Library in the mid-1930's, unveiled on August 25, 1935. He was from Santa Monica.

The Mural's history is narrated at the library's website. Macdonald-Wright, had plywood panels specially prepared. This technique, termed "portable murals," was also utilized by famed Mexican muralist Diego Rivera. Such a procedure enable easy removal from the wall if necessary. This is exactly what happened in 1965 when the library moved to a newly-constructed building located at 1343 Sixth Street. 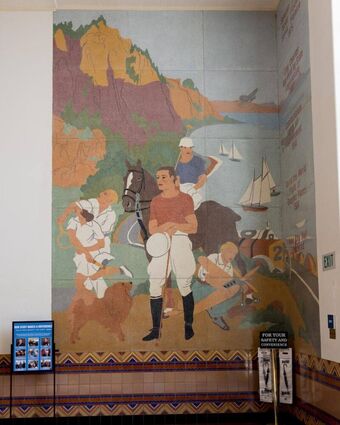 According Dr. Noah Bardach, an art-historian and co-founder of Universal Human Rights Initiative (UHRI), a non-profit focused on human rights education, "The WPA murals at the entrance to City Hall, depicting two American Indian men at the feet of a conquistador and a Franciscan friar, communicate prominent themes of white supremacy over Native Americans and other people of color."

Local activists demand the murals to be moved to a local museum.

Dr. Bardach further explained: "These images glorify two historical tragedies for indigenous peoples, the Conquest and forced conversion by the Catholic Church, both of which resulted in the decimation of local populations from violence and sickness. The loss of life suffered during this period can rightly be thought of as a Native American Holocaust. Paired with this message of Native American subjugation and suffering is a mural of Caucasians at leisure. "

"Together, these two murals convey a vision of Santa Monica as an enclave for the pleasures of the White leisure class, one where people of color are kept in an inferior status and hidden out of sight."