The prostitutes wait for business directly below DTSM's office 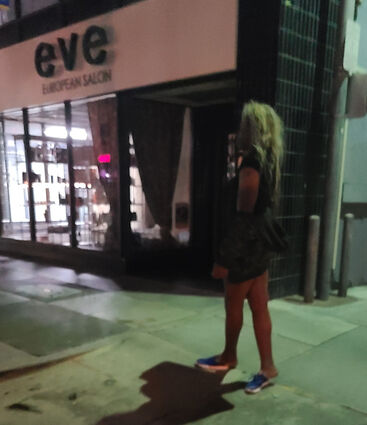 Prostitute waiting for business outside Eve

October 8, 2021 - Prostitution is now an ongoing operation in the alleys behind the Third Street Promenade. Another set of prostitutes operate on Broadway between Ocean Avenue and 5th Street, outside Santa Monica Place.

Promenade property owner John Alle took photos of the strolling prostitutes as well as a drug deal going down in the alley behind the Promenade at Wilshire. The prostitutes wait for business directly below Downtown Santa Monica Inc.'s expansion office at Wilshire and 3rd Street Court. DTSM is the quasi-governmental agency responsible for the upkeep and business environment of the downtown and Third Street Promenade. Alle notes that "The people from the Block-by-Block Ambassador office look directly down on this." The Safety Ambassadors are supposed to monitor the Promenade and create a safe environment. 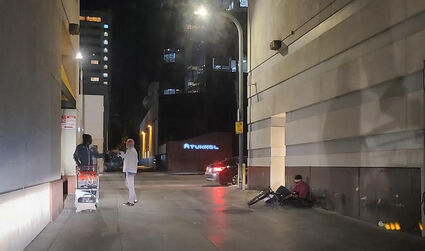 A drug deal taking place in front of the photographer's car

Santa Monica has taken a hands-off approach to the homeless and criminal activity for some time, thereby attracting yet more criminal vagrants to the city. In addition, the new District Attorney of Los Angeles County, George Gascon, has forbidden his staff to file for resisting arrest, prostitution, drug and alcohol crimes, DUI, driving without a valid license, and trespassing. Once the prostitutes are established, there is little Santa Monica police can do to prevent them from conducting business. The Santa Monica jail is for temporary holding only. The only crimes for which SMPD will arrest and detain must rise to the level of what the county will prosecute and put in their own jails. That does not include prostitution or drugs crimes.

Unwanted activity such as prostitution, theft, trespassing/homesteading on private property and the like will only increase and expand in scope as individuals take advantage of the lack of enforcement and apparent lack of interest in maintaining a safe and attractive public space.

Liberal utopia. They love this kind of stuff, right up their alley. Probably where Schiffty Schiff goes to procure his victims.