Gascon's Staff Accuses Him of Political Cronyism in Lawsuit 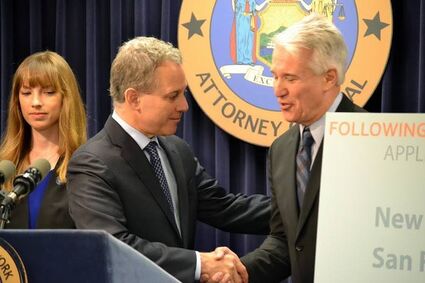 Gascon gladhands New York State Attorney General in 2014; his career has been built on his associations with various supporters, including George Soros

The Los Angeles County Charter and civil service protections were designed to ensure good government by protecting independent institutions from political cronyism. However, these protections are not self-executing. The lawsuit seeks to stop the sitting district attorney, George Gascón from filling the civil service ranks with political loyalists and financial supporters.

The Los Angeles County Charter establishes a Civil Service System which requires employees to be selected and advanced for their ability, knowledge and skill, prohibits discrimination based on political affiliation, and protects employees against coercion for political purposes. In violation of the charter, the District Attorney hired unqualified political supporters from the Public Defender's Office and appointed them to Deputy District Attorney positions instead of selecting qualified career prosecutors on the active eligible lists for those positions.

Prosecutors are obligated to ethically enforce the law and ensure public safety. To do so they must engage in decision making that is free from the threat of political retaliation or the promise of political reward. The ADDA is seeking court intervention because of the continued abuse of the current administration in violating important institutional safeguards designed to insulate the effective administration of justice from political influence.