How Cats Came to Rule Ancient Egypt, And Learned to Shape Shift in the Process

Lesser-Known Cat Legends from Around the World: Watch out for soul-stealing felines this Samhain! 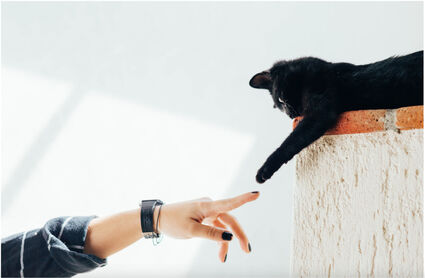 This Spooktober, the Observer has been featuring articles about cats -- first the black cats that are the hallmark of the season, followed by their festive ginger counterparts.

This week, we're featuring a trick-or-treating bag brimming with a wide variety of cat mythology and superstition from around the world. While not an exhaustive treatment of the subject, we hope the taste of some of these legends might spark your interest.

Japan: Bakeneko and Nekomata. Ancient beliefs in parts of Japan state that once a cat reaches an advanced age, he or she may become a Bakeneko: a shape-shifting yokai (monster or supernatural being) that walks on hind legs, speaks human language, and might indulge in the occasional cannibalism -- eating their human guardian and assuming that person's form. (This belief is not just fantasy -- refer to Will My Cat Eat My Eyeballs by Caitlin Doughty for gruesome details.)

Bakeneko can also have the ability to reanimate corpses and turn them into meat-puppets who do their bidding. But honestly, what cat guardian hasn't occasionally felt like a meat-puppet doomed to do the bidding of their furbaby for all eternity? Since a longer tail was thought to indicate advanced wisdom and age, and therefore high likelihood of transforming into a Bakeneko, cats with naturally short tails may have been favored in Japan in a form of inadvertent selective breeding which led to the rise of breeds such as the Japanese bobtail. Speaking of tails, there is an even more menacing evolution of the Bakeneko: the two-tailed Nekomata.

These "forked cats" were more powerful and malevolent than the common Bakeneko; they had the ability to summon fireballs to burn entire towns. Eventually, they might move from the villages to prowl the mountains in the shapes of leopards or lions.

Egypt: Deities and mummies. Since Egypt hosts several species of venomous snakes, any animal that could kill those threats was naturally regarded with benevolence and respect. This may have led, in Ancient Egypt, to the deification and eventual domestication of the then-wild feline populations, including jungle cats and African wildcats -- the latter species being the ancestor of all housecats today.

Certain deities, such as Mafdet, Bastet and Sekhmet, were depicted with the heads of cats. Mafdet, for instance, was an early goddess of justice, capital punishment, and hunting. She was often sculpted with the head of a cheetah or serval, and painted wearing a cheetah skin. Bastet, or Bast, and Sekhmet, were merged together in the later dynasties as two edges of the same sword: Sekhmet the lioness represented warrior spirit and protection, whilst Bastet the domestic cat represented a gentler, motherly aspect. Pharaohs may have dressed their own cats in golden jewelry and allowed them to eat off their own plates. But all was not glitz and luxury for the kitties of Ancient Egypt -- countless numbers of them were bred to be strangled to death and mummified as offerings to their own patron goddess Bastet.

British Isles: The King O' the Cats. A nursery tale or folktale, at least as old as the 1500s, tells of a man who returns home to his wife and his cat "Old Tom" to tell of a strange happening along the road: the man came across a funeral procession of nine black cats with white spots on their chests, carrying a coffin.

One of the cats told the man, "Tell Tom Tildrum that Tim Toldrum is dead." Upon hearing this, Old Tom jumps up, exclaiming, "Tim Toldrum is dead?! Then I'm King o' the Cats!" He darts up the chimney, presumably off to some feline palace. Apparently the family cat was next in line to inherit the crown, unbeknownst to his human wait staff. 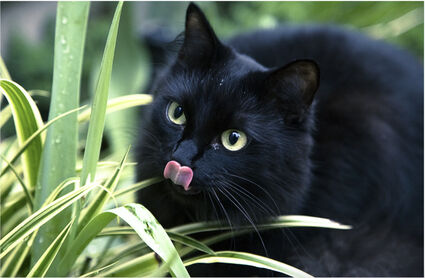 Bad luck? Simon sticks out his tongue at that. In parts of China, Japan and the UK, black cats are associated with good luck, and can bless marriages or bring good suitors to a single woman.

Those black cats with white chest markings also appear in more ancient legends of Scotland and Ireland: the Cat Sìth. In some cases this cat was actually a human witch who could transform herself into a cat nine times -- on the ninth occasion, she would be stuck as a cat forevermore. Cat Sìth were fearsome soul-stealers who would try to capture the spirits of the recently dead, preventing them from going to heaven.

To prevent this, Scottish Highlanders would sometimes perform an all-night funeral watch called Fèill Fhadalach. To distract any approaching Cat Sìth, they would offer catnip and wrestling games. In addition, the Celtic and Gaelic festival of Samhain (an ancestor of our own Halloween) included a tradition of leaving out a saucer of milk on one's doorstep on the evening of October 31. A passing Cat Sìth would bless all the houses with saucers, whereas households that neglected to leave out a saucer would be cursed, and their cows' udders would go dry.

So it seems that cats have been blackmailing us into getting the goddess treatment since the dawn of time.