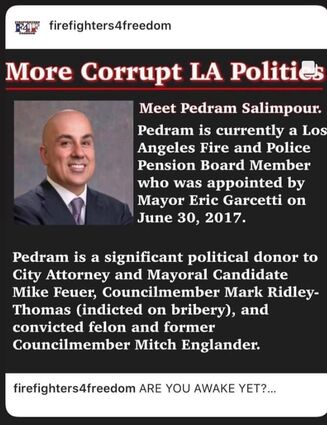 October 29, 2021 - The Los Angeles Police Protective League, union for police officers in the City of Los Angeles, filed a lawsuit against the city for awarding what they claim was a #3 million no-bid contract for Covid testing to a company owned Fire and Police Pension Commissioner Pedram Salimpour.

According to the LAPPL, the city rejected their offers to get Covid testing through their own health providers, the County of Los Angeles, and all other testing options. Only testing by Salimpour's company, Bluestone, is deemed acceptable by the City of LA.

The LAPPL claims the city's statement that Salimpour was not "engaged" in the process of selecting his own company for the testing contract is untrue and that he lobbied the Mayor's office to select his company for the lucrative deal.

The city also stated that Commissioner Salimpour was not "part of the review and vetting process concerning the COVID-19 testing and related services contract."

LAPPL's response: "We certainly hope not. To have Commissioner Salimpour be part of the selection of his own firm would be illegal, although nothing coming out of City Hall these days should surprise any of us."