The perpetrator accosted two people in broad daylight on Wilshire Boulevard, claiming to have a gun 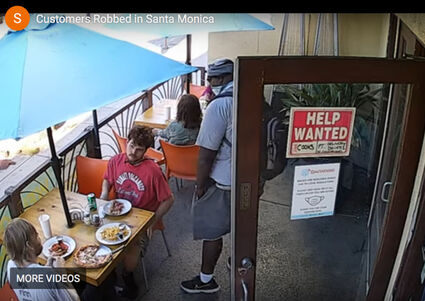 The young man had resisted Daniels's long monologue until this moment, when his face indicated taking out his wallet was not voluntary

November 17, 2021 - On Saturday, two patrons of Dagwoods Pizza were robbed during the lunch hour by a man claiming to have a gun. The two men were seated on the outdoor patio of the restaurant located just east of Lincoln Boulevard on Wilshire when they were approached by what the surveillance video shows to be a heavyset black man with a backpack.

The man, later identified as Jamar Daniels, 39, allegedly told the two men he had a gun. After robbing them of an undisclosed amount of cash, he took off on a bicycle.

Dagwoods manager Christina Moy told The Santa Monica Sun that she’d noticed Daniels come onto the patio, “and I thought, ‘Maybe he knows these people.’”

Two women at a nearby table were allegedly unaware of the entire incident.

Daniels was arrested that afternoon at Reed Park. He was charged with robbery and the possession of methamphetamine and cocaine. (Amazingly, it is still illegal in California to possess these particular drugs.)

Daniels will probably not be charged for his visit two nights earlier to the restaurant when he stole a tip jar holding about $15 that was sitting on the front counter. Neither will whoever burglarized the restaurant twice last spring, stealing a digital camera Apple Watch and wedding ring that had belonged to an employee.

And that is the problem. That is why a man thought he could physically rob two people on busy Wilshire Boulevard in the middle of the day. That is why the severity of crimes is going to intensify in this atmosphere of indifference to crime.

Burglary of an amount under $950 is a misdemeanor in California, thanks to Proposition 47. In reality, the Santa Monica Police will not arrest you unless the amount is over $20,000, according to several SMPD officers who spoke to us at a meet-and-greet on Montana Avenue this fall. Instead of arrest, the burglar is issued a citation and allowed to go on their way.

It is unlikely Daniels will be held on cash bail. No force or bodily injury actually occurred during the crime. He did not produce a weapon in reality, nor did he have one when police arrested him. Free on his own recognizance, he could easily return to Dagwoods or try some other outdoor eatery and go for some more easy cash.

Santa Monica City Councilmember Phil Brock said of the robbery, “The robbery at Dagwood’s occurred in broad daylight on a busy boulevard. As state and county laws and practices have made abundantly clear, the protection of law abiding citizens is not valued.” 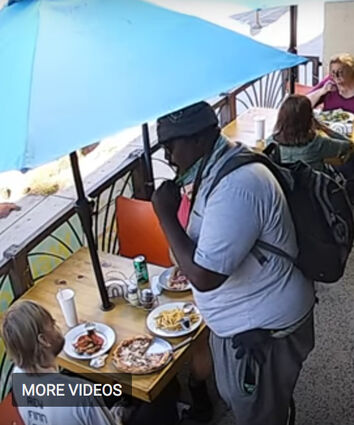 Daniels continued to lecture the two men after he'd taken their cash; he pulled down his mask to do so

Daniels will not be the last criminal to rob Santa Monica residents or visitors, but he might be the beginning of a more frequent event, one that will soon include actual guns instead of mere threats.

When policing and sentencing are relaxed for ‘less’ violent and ‘less’ costly crimes, when consequences are reduced for more violent and more costly crimes, then criminals will happily take advantage of the opportunities thus provided.

It may seem compassionate to give ‘misguided’ individuals a second chance. It may seem logical, to some, that punishment won’t necessarily lead to rehabilitation. But these sweet and loving philosophies do absolutely nothing to promote the safety of the rest of us, who are then openly available prey to anyone who chooses to do evil.