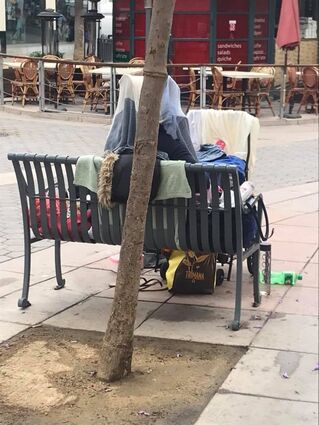 Homeless individual monopolizing a bench on the Third Street Promenade

Public seating has been removed from the Third Street Promenade from Monday through Thursday. The chairs are replaced over the weekend when more actual shoppers arrive to spend time there. "Unhoused individuals...appeared to be monopolizing the chairs," Downtown Santa Monica Inc spokesperson Kevin Herrerra reportedly told The Santa Monica Sun.

The move was suggested originally by business and property owners along the Promenade, according to property owner John Alle. "The chairs were being abused, moved, and used for hours or most of the day by homeless people and vagrants, many of whom pulled several together and would store their sleeping gear, bags of food and trash, basically all their belongings," he told the Observer. "The urine, vomit, feces and discarded food became a health issue for all, and a maintenance issue for City maintenance employees and DTSM ambassadors." Alle added he personally witnessed one homeless individual using one of the chairs pull a knife on an unsuspecting bystander.

Or, as Herrerra put it to The Sun, "the chairs were a magnet for some anti-social behaviors."

The removal of the chairs is hoped will discourage vagrants from coming to the Promenade. 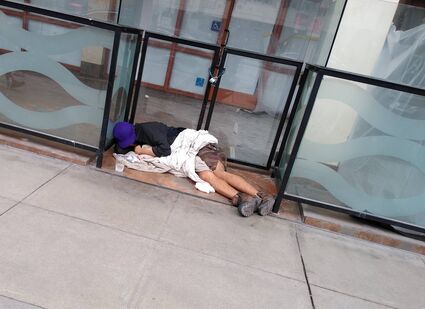 Removing the chairs won't necessarily solve the problem; this individual was sleeping in an empty storefront in the middle of the afternoon

So where will the vagrants go next? Wherever they end up, the bad behavior, fetid trash, and violence will go with them. Removing the Promenade chairs simply transfers the problem to another location. And that location, too, will have to devise some way of reducing its attractiveness by removing public amenities. A wag on social media suggested they remove the elevators from the public parking garages as well.

On the other hand, public leaders could direct that local ordinances be enforced.

Public leaders could direct more resources to directing vagrants off our streets and into appropriate shelters where they can receive the support they so obviously need. Instead, vagrants are ignored and dismissed. Highly anti-social behavior - theft, robbery, prostitution, assault - are all tolerated with no consequences delivered. The chairs are removed? They will either sit on the ground, steal their own, or take their problems down the street to some other hapless location.

On a Santa Monica social media website, one resident wrote, "The removal of basic resident amenities is simply the socialization of the cost of bad public policy. The policy makers do not bear the cost - the residents and business owners do."