Suspect with a blond pony tail apparently steals a bread truck, wanted for assault with a deadly weapon against an officer 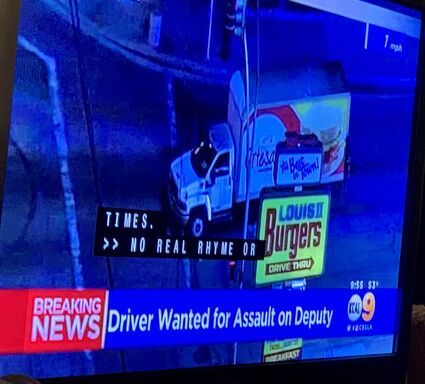 11/25/21 Maybe she remembered she was supposed to bring the rolls and couldn't find an open store on Thanksgiving.

A woman driving a Nature's Harvest bread truck lead police and sheriff's deputies on a chase through the streets of Los Angeles and into Long Beach Thursday evening, beginning around 8:45 pm PST.

The suspect stole a Nature's Harvest bread truck on Thanksgiving night and drove it without its lights on. She stopped a couple of times at some intersections but not at others.

The pursuit began with the LA County Sheriff's Dept. in South LA. Los Angeles, Long Beach and Compton Police all were involved at different points in the pursuit. At about 10:12 PM, the woman driver stopped the truck, smoked a cigarette, then tried to run away from officers. Ten or so sheriff's deputies caught her and brought her to the ground, arresting her.

At one point she backed up into police vehicles. "Just crazy driving on this guys part," said retired officer Daron Wyatt, speaking on KCAL 9 news. 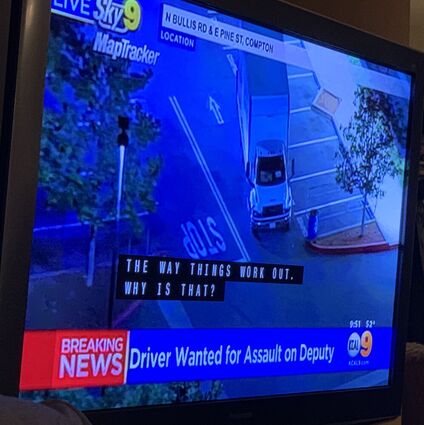 The suspect is wanted for stealing a breadbox truck, and for assault with a deadly weapon against an officer with a vehicle in a Target parking lot. After police deployed spike strips, smoke and sparks poured from the bread truck's back tires.

She drove onto a sidewalk once or twice, hit a tree and sideswiped a vehicle during the pursuit. By 9:45 pm, there was smoke pouring from the trucks tires. Cars tried to get out of her way, except when she went down tight residential streets.

At 9:52 pm, the suspect pulled into a parking lot with his damaged bread truck, it seemed that she would either give herself up, or it would turn into into a barricade situation. But a couple of minutes later she left the parking lot, and drove North out of Long Beach and into Compton around 10 pm PST.