Semeru Volcano Erupts in Indonesia, Killing Scores, Injuring 45 on the Island of Java

Children are seen running from the eruption of the Semeru Volcano, Java Island, Indonesia.

12/4/21: Villagers in Indonesia Saturday ran from a violent eruption of the Semeru volcano, the highest volcano on the island of Java. It threw a column of ash 15KM into the sky, covering nearby villages in ash and forcing villagers to run. 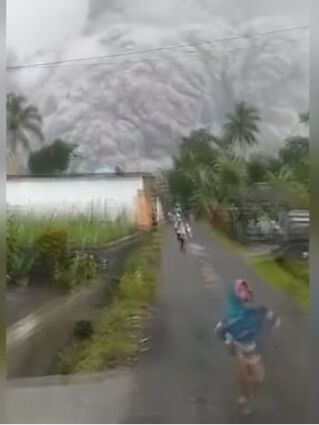 Children are seen running from the eruption of the Semeru Volcano, Java Island, Indonesia.

Authorities evacuated residents adjacent to the foot of the volcano. Videos appeared on social networks in which residents flee from volcanic ash.

"We see a lot of volcanic ash hiding the sun," reported one local resident.

A warning has been sent to the airlines that volcanic dust and ash can rise up to 15,000 meters. While there was no official information about the destruction and casualties, clearly dozens were killed by the surprise eruption.

"At least 45 people in Candipuro District, Lumajang Regency, East Java, have been burned as a result of Mount Semeru's eruption as of Saturday night," reported News Asia 24. "This was revealed by the Minister of Health, Budi Gunadi Sadikin."

At about 11,000 feet, Mount Semeru is the highest mountain in East Java. The last volcanic eruption took place in January this year.