The city's policies against arresting burglars, shoplifters, and trespassers have made the area one of the prime locations for those who don't want to work for a living 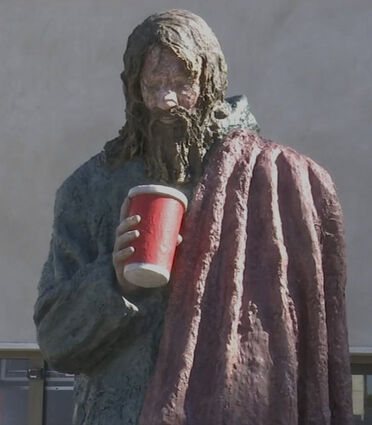 The statue titled "In the Image" was only supposed to stay in this location for 6 weeks. It lasted 3 years before it was toppled around the end of November

Artist Ed Massey's statue titled "In the Image," of a seven-foot-tall homeless homeless man was knocked down by vandals around November 30, almost exactly three years after the supposedly temporary statue was erected at the corner of Wilshire Boulevard and 26th Street. The artwork took the place of a sculpture of a family of mother, father, and children dancing in a fountain, a work that stood for decades in front of the one-time bank building on that corner.

Mayor Lou Ellen Camelwealthy expressed dismay at the vandalism. "The unwashed meth addict was a symbol of our fine city by the bay," she said at a press conference regarding the destruction. "Santa Monica prides itself on being a home for drug addicts, a place where they can live as they choose, without fear of being called to account for their life choices. We are at the leading edge of progressive niceness. We want to continue to be known for our bleeding compassion that keeps the mentally ill and physically vulnerable out on the street. And we will continue to be known for it, despite this unparalleled atrocity."

The city's policies against arresting burglars, shoplifters, and trespassers have made the area one of the prime locations for those who don't want to work for a living. In Santa Monica, the homeless can homestead on public and private property and thrive, Camelwealthy said. "When a homeless individual camps out in the parking garage of an apartment building or when they prowl the backyard of a private home - when they steal sandwiches and beer from the grocery store - they are living out our dream of freedom for all. True freedom." 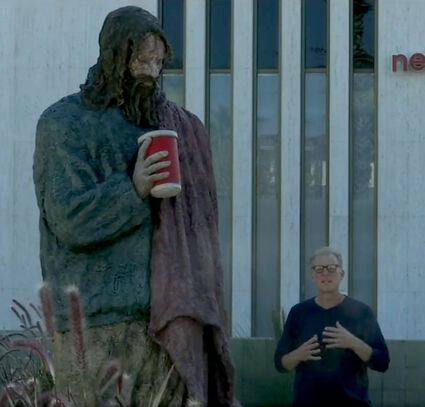 "In the Image" with his artist, Ed Massey

Camelwealthy made it clear that no expense would be spared in discovering the perpetrators of the violent act. "Those who would vandalize a lifeless effigy made of plaster and plastic deserve unending retribution for their disrespect for private property - that is the private property of those with whom I agree. Not those other people. And not my own property, of course. Not that I'm keeping my property in Santa Monica for much longer. The crime has gotten so bad here that once the affordable housing project I've approved next door to me goes in, I'm moving to Florida."

Camelwealthy ended the press conference by promising she will do everything in her power to keep Santa Monica the capital of homelessness in Southern California, despite the loss of this important symbol.

Are you kidding me? This mayor wants our city on the beach toentertain drug addicts, and the like in our city. Or crime had increased tremendously. What about our rights? Or school sage kids rights to getting safe!! What kind of nonsense is that!!!!! Another good reason to move out of Santa Monica. Jeez! What dumb idiot