Roar of engines and contrails over the town with California's oldest airfield.

The roar of six vintage planes practicing sky writing could be seen over Santa Monica on Sunday afternoon. We were lucky enough to capture them on video as they flew through the sky, occasionally laying out contrails.

Santa Monica is home to the oldest airport in California, 100+ year old Clover Field. Sadly, it is very close to housing built during WWII, and is slated to close forever in 2030. 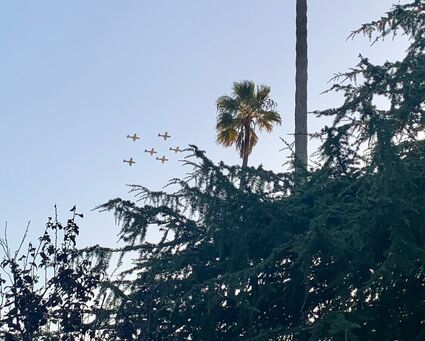 Skywriting is the process of using one or more small aircraft, able to expel special smoke during flight, to fly in certain patterns that create writing readable from the ground, says wikipedia. These messages can be advertisements, general messages of celebration or goodwill, personal messages such as a marriage proposals and birthday wishes, or acts of protest.

The LA Times notes that eight AT-6/SNJ Texans are based at the Van Nuys airport. "Pilots of the Condor Squadron ... and its members own eight AT-6/SNJ Texans, one of the largest collections in the country." https://www.latimes.com/local/la-xpm-2013-dec-24-la-me-condor-squadron-20131225-story.html?fbclid=IwAR3xY3T8S3vMci8dRROnwQqRs-CcHy7BhwA_2Zs9q-knY-xx6FocLw4821I

I'm not an aviation buff, but Bob Brennan is and he suggests these planes are F-4U Corsairs. https://en.wikipedia.org/wiki/Vought_F4U_Corsair