Most of those infected were vaccinated 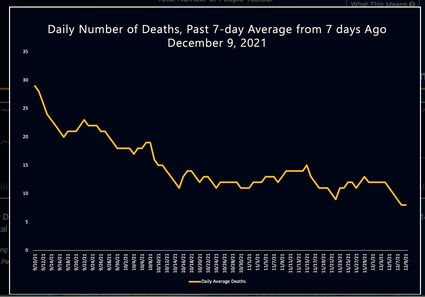 12.17.21 - Today the the Los Angeles County Department of Public Health announced an additional 8 cases of Omicron had been identified, bringing the total number of Omicron cases in the region to 38. The first Omicron case was reported in LA County on December 2. By December 9, county health officials could not trace the origin of the infection and labeled the fourth Omicron case a "possible result of local transmission."

Of the 8 cases reported today, 5 individuals were fully vaccinated with one of them also having received a booster shot. Two of the individuals reported international and domestic travel respectively. 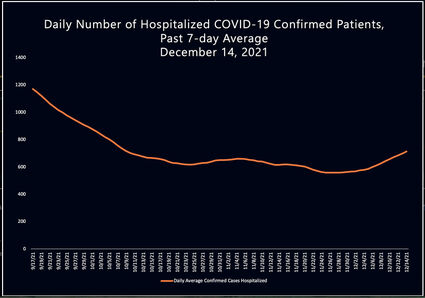 Daily number of hospitalizations up to December 14, 2021

Of the new 12 cases reported Thursday, 5 were symptomatic without requiring hospitalization. For 6 of the cases, officials did not know the symptom status or if any of those individuals had been hospitalized. Nine of the 12 were fully vaccinated. 2 of that 9 had received booster shots. The remaining 3 were unvaccinated. None of them had traveled internationally although 2 reported they had traveled outside of California.

LA County also reported a sharp uptick in the daily number of cases, with 2,275 new positive cases identified yesterday and 3,360 today. Wednesday saw 1,850 new cases and Tuesday had 1,138 new cases. The daily number of deaths on Thursday, 20, was the highest daily number since Saturday, which saw 23.

The number of people currently hospitalized with Covid-19 is 772, a number that has been slowly climbing since Thanksgiving, when it was below 600.