Omicron Now Behind 85% of Covid-19 Cases in LA County, and That Seems to Be Good News

The new variant accomplished in 4 weeks what 10 months of vaccines could not do: defeat Delta 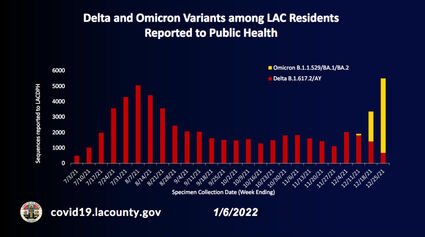 Omicron, in yellow, has crowded out the Delta variant in a few short weeks

January 7, 2022 - During her weekly press conference yesterday, Dr. Barbara Ferrer, Director of Public Health, appeared optimistic about the apparently lower hospitalization and death rate during the latest surge of Covid-19. In just one week, Omicron went from 54% of sequenced samples to 85%. The number of Delta variant cases in the population is lower than at any time since that variant crowded out the previous version of the SARS-CoV-2 virus, sometime during last summer.

"Unlike the last winter surge, when the hospital census increased significantly," Ferrer stated, "during the current surge the hospital census has remained much more stable." She noted the percent of people in the ICU is much less than last year. "For the time being, death rates remain low and stable," she said. This form of the coronavirus is exhibiting "a very different trajectory from last winter or last summer."

"It is still early, though," she warned. Hospitalizations can lag a couple weeks behind cases and deaths can lag several weeks beyond that. However, Dr. Ferrer appeared optimistic during the press briefing.

Examination of Los Angeles County Department of Public Health Data shows that between Christmas and New Year's the non-age-adjusted rates of hospitalizations went down for both the vaccinated and unvaccinated, with a much bigger improvement for the unvaccinated:

The non-age-adjusted rates of death also improved during this week for both groups: 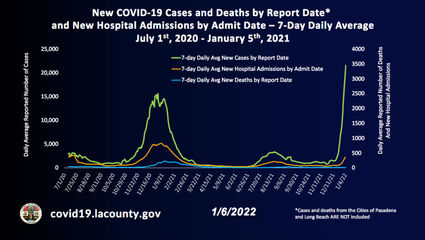 Although hospitalizations can be seen to rise at the bottom right corner of the graph, it is not at as steep a slope (as fast a rate) as would be expected from the previous surge last January

Unvaccinated deaths per case: from 1.83% to 1.75% (while this is only a difference of .08%, it is the first time in a year this case fatality rate has lowered)

Dr. Ferrer said she expects the present surge to have abated by February 13, when the Super Bowl will be held in SoFi Stadium.