Largest Volcanic Eruption Of This Century Could Be Heard 6,500 Miles Away in Fairbanks, Alaska

A Few Astonishing Facts About the Largest Volcano in the 21st Century, Which Blew Up World's Youngest Island 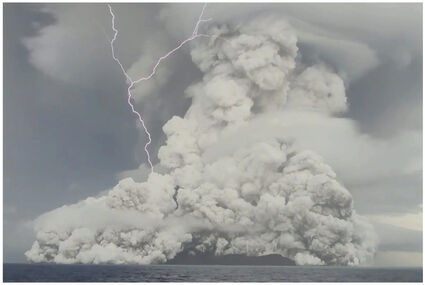 The Hunga Tonga-Hunga Ha'apai volcano erupted off the coast of Tonga on Friday.

January 14th's eruption of Hunga-Tonga-Hunga-Ha'apai volcano, located on the seismically active Pacific Ring of Fire, sent tsunami waves across the Pacific Ocean. The audible report carried some 2,300 kilometers away in New Zealand, a distance of over 1,430 miles.

It was widely reported (including by seismologist Lucy Jones), that this was "a once in 1000 year event." Actually, the eruption was a once in 1000 year event at this particular undersea volcano, which also erupted in 200 AD and in 1200 AD. On average, the world has 4 major volcanic eruptions per year, and 2 of them are undersea. In terms of magnitude, which was a 5 on the 10 point scale used by volcanologists, it warranted a 5.

The eruption caused tsunamis in Tonga, Fiji, American Samoa, Vanuatu, and along the rim of the Pacific Ocean, including damaging tsunamis in New Zealand, Japan, the United States, the Russian Far East, Chile, and Peru. One person was killed and many remain missing in Tonga, two people drowned in Peru when a 2 m (6 ft 7 in) wave struck the coast, and two fishermen in the United States suffered minor injuries. The event is likely the largest volcanic eruption of the 21st century as of January 2022.

The name, which is a mouthful, is because the volcano created first two islands in 2014, Hunga-Tonga and Hunga-Ha'apai. In 2009, the volcano merged them into one island, Hunga-Tonga-Hunga-Ha'apai. A few days ago, it blew up the island above the surface, with the exception of two fragments at either end. A few more facts from Reuters:

Saturday's eruption was so powerful that space satellites captured not only huge clouds of ash but also an atmospheric shockwave that radiated out from the volcano at close to the speed of sound, 625 miles per hour.

The magma in the volcano, superheated to about 1800 degrees Fahrenheit, rose to meet 20-degree seawater on Saturday, causing an instantaneous and massive explosion.

American meteorologist, Chris Vagasky, monitored lightning attracted to the active volcano and found it increasing to about 30,000 strikes in the days leading up to the eruption. On the day of the eruption, he detected 400,000 lightning strikes in just three hours. 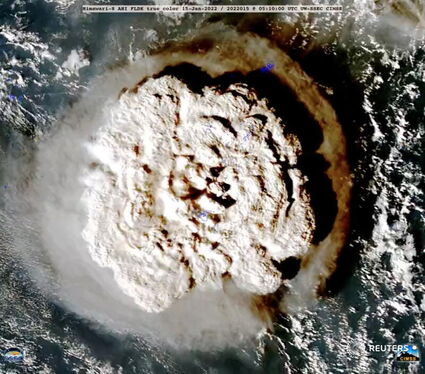 Hunga-Tonga-Hunga-Ha'apai island, with the cloud from the volcano above it.

The New Zealand High Commission reported damage along the western coast of Tonga's main island of Tongatapu. It includes many vacation resorts, and the waterfront of the capital, Nuku'alofa.

The explosive submarine eruption began on December 20, 2021, with the largest explosion so far, on January 15, 2022, Satellite measurements recorded an eruption column of at least 98,000 feet (30000 m) into the atmosphere. The explosion was heard as far as Fairbanks, Alaska, nearly 6,500 miles away, shattering Krakatoa's 1883 previous record of 3,000 miles. Fluctuations in air pressure were recorded all over the world as the pressure wave has fully circled the world several times. Two people were killed in Peru by a six foot tsunami wave. A British woman was found to have been killed by the tsunami in Tonga.

The eruption is likely the largest of the 21st century to date, with a possible VEI of 5 or more.