Recycle a cell phone-help save a gorilla's life. 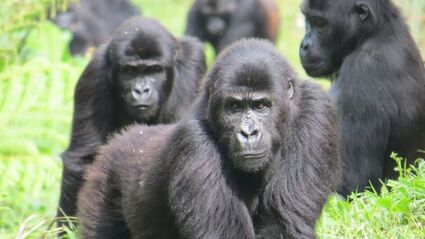 Grauer's Gorillas have suffered a 77% drop in population

Sounds overly simplistic, but it's true. Recapturing the precious minerals locked inside the 500 million dead or dormant phones estimated to exist in the U.S. alone would drastically reduce the need for mining in the Congo, where the activity has wreaked havoc on gorillas and other animals that share their embattled habitat. When cell phones are tossed in the trash, the problem is compounded-and the effects hit closer to home. Electronic devices in landfills leach arsenic and other toxins into ground water, causing human health consequences on top of environmental damage. Diverting these devices from landfills also reduces greenhouse gas emissions, which most scientists believe are driving global climate change.

Grauer's gorillas-a subspecies severely impacted by the consumer electronics explosion-have suffered a 77 percent population decline in the last few decades. Eco-Cell, the Zoo's partner in these efforts, donates refurbished phones directly to field conservation projects. At the Gorilla Rehabilitation and Conservation Education Center (GRACE), such phones have been used to speed diagnosis of sick gorillas.

Tantalum, derived from columbite-tantalite (also known as "coltan"), is a critical component in cell phones. The majority of the world's supply of coltan is found in the Democratic Republic of the Congo (DRC). Since the early 1990s, skyrocketing demand for tantalum has led to a "coltan rush" that has created a conservation crisis, crippled the country's agricultural industry, and contributed to civil war. While their distribution is more widespread, tungsten (used to make cell phones vibrate) and tin (used to create solder for circuit boards) are also mined in the DRC. These are the "three Ts" which, along with gold, are generally what is meant by the term conflict minerals, raw materials originating from an area of civil war or unrest and sold to finance the violence.

The concentrated presence of these minerals in the DRC has led to uncontrolled mining in this highly biodiverse, ecologically sensitive region.

Then there's the poaching. "Each mine, whether legally operated or not, involves a set-up in the forest that requires not only destruction of the land to unearth the minerals, but numerous people to operate the mining sites," says Dr. Tara Stoinski, president and chief scientist of Dian Fossey Gorilla Fund International. "To feed these people, wildlife is hunted from the surrounding forests. This includes gorillas, chimpanzees, elephants, and many other species." Trade in "bushmeat" (exotic animals killed for human consumption) is illegal, but in this war-torn region, such laws are virtually unenforceable.

The L.A. Zoo's cell phone recycling program was spearheaded by the L.A. chapter of the American Association of Zoo Keepers (AAZK/LA). An Eco-Cell collection box was installed in the Zoo in 2009.

To guard your privacy and protect against identity theft, it is important to take a few steps before surrendering your phone. First, remove all your personal data-including photos, emails, texts, and contacts-from the device. The process varies depending on the brand and model but generally takes just a few seconds. Google "how to wipe a cell phone" plus your device type for instructions, or visit http://www.wikihow.com/Delete-Cell-Phone-Memory for more information.

What if you can't even power up the phone? For really old phones, where literally all you have in there are phone numbers, there's not much of a risk." Still, if you're worried about your old contacts getting into the wrong hands, he offers a stress-relieving solution: "Destroy the phone first, and then send it in. We don't care. It's going to get ground up into a million pieces anyway."

Once the memory is clear (or the phone destroyed), remove the SIM card, make sure the service is turned off, and drop it off at the Zoo.

What happens to your cell phone after you donate it? Once the Zoo accumulates enough devices to fill a shipping box, they are delivered to Eco-Cell. Eco-Cell staff sorts donations, quickly determining which items will be refurbished and resold and which will be recycled. 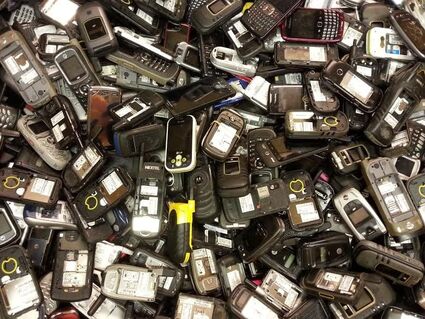 After being relieved of their batteries (which are processed separately), end-of-life devices are sent to a certified electronics recycler, where they are dismantled and crushed. The resulting fine powder goes to a smelting company. The minerals extracted in the smelting process are recast and sold by the pound on the gold market.

Eco-Cell is a "no landfill" program and works only with facilities that are certified under R2 / BAN or ISO 14000 standards. They go beyond the three Ts, recovering more than 20 elements ("from Ag to Zn") in their global operation. Copper can be extracted from A/C adapters, earbuds, cables, and other accessories, and lithium ion batteries are recycled for their nickel.

You can show your love for gorillas by delaying your next cell phone upgrade, signing this pledge to purchase devices free of conflict minerals, and dropping your old phones off at the Zoo the next time you visit. Look for the green mailbox-style container at the bachelor gorilla habitat in Campo Gorilla Reserve.