By Cal Office of Emergency Services 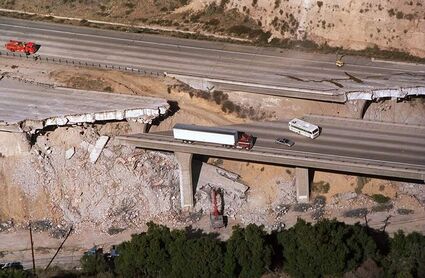 Aftermath of Los Angeles's 6.6 Earthquake in 1994. Even a few seconds' warning could help prevent tragedy

The MyShake app, funded by the California Governor's Office of Emergency Services (Cal OES) and developed by the UC Berkeley Seismology Lab, has launched its newest enhancement called HomeBase.

It allows users to set a default location where they can receive earthquake early warning alerts, even if location services are temporarily down or turned off. This will increase MyShake's ability to send timely alerts so that Californians affected by an earthquake can receive a warning for a location of their choosing and be prepared for shaking.

To activate the HomeBase function, users should update their MyShake app and navigate to the Settings page, where they will find an "Add HomeBase Location" button.

Other new features on the app include an audible tone prior to the verbal warning, which can be accessed by checking the audio and visual alerts in the Settings > Notification page.

Tsunami safety information has also been added to the Safety Pages to remind people near the coast what steps they can take before, during, and after an earthquake to protect them from tsunamis. This update is timely given the recently occurred Tsunami Advisory that occurred along the entire West Coast due to a volcanic eruption near the Tonga Islands.

These new functionalities are important especially since Governor Newsom has proposed $17.1 million to enhance support of the California Early Warning Program in the 2022-23 State Budget – the California Blueprint.

In addition, due to the success of MyShake, California is expanding its earthquake early warning system to two states. In partnership with the Oregon Office of Emergency Management and the Washington Emergency Management Division, the app is now available for people who live, work or visit Oregon and Washington.

Launched in 2019, MyShake, which is also available in Spanish, was the first app to provide statewide earthquake early warning alerts for earthquakes with a magnitude of 4.5 or greater. The amount of advance notice received varies depending on proximity to the epicenter.

MyShake also provides damage reports after an earthquake. Within the app, users can report damage so that others can see where damage has occurred in order to avoid those areas.

Since 2020, Android phones have earthquake early warning technology built in. However, Android owners can still benefit from the many other functions of MyShake, including the new Homebase feature.

To download MyShake and to learn more about earthquake preparedness, visit earthquake.ca.gov.

For those who want to keep location services off due to privacy concerns, Californians can still receive alerts now through the HomeBase feature. No personally identifiable information is used or stored by MyShake.

The HomeBase feature differs from a function already in the app where users can receive earthquake notifications for other locations, even in other countries. For example, if users want to receive notifications for earthquakes that occur where family or friends live, they can add those locations under Settings > Notifications.