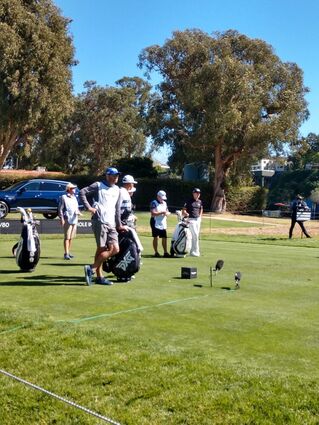 Maverick McNealy, Peter Malinati, and James Hahn wait out a delay on the par-3 14th hole.

This year's return of the fans to Riviera after a Covid-restricted tournament last year coincides with perhaps the strongest field of players outside of the major tournaments, with every member of the top ten appearing. World number two Colin Morikawa gave the best showing in the group, coming in at four under and in prime position to make a move.

Dustin Johnson, fifth-ranked in the world and a former winner at Riviera, fought a balky putter and fell afoul of the sand traps on the short tenth hole to card a double bogey there and a two over par for the day.

Neiman had no such trouble with the tenth hole, making it one of his nine birdies on the day. His only stumble was a three-putt bogey on the twelfth hole. He has only one win on the PGA tour, the 2019 Greenbrier, but lost two events last year in playoffs and may be breaking through.

Last week's big story, Pepperdine graduate Sahith Theegala, continued his run of strong play with a two -under round. After riding a sponsor's exemption to a third-place finish last week in Phoenix, Theegala continued his strong play on a course widely considered to be one of the toughest on the tour.

Riviera was bathed in warn sunshine and still air all day, and, unlike other courses that depend upon weather and wind to defend par, it held up to the assault of the best golfers in the world. Half the field failed to break par, and such big names as Kevin Na, Hideki Matsuyama, Patrick Reed, and Harold Varner III joined Dustin Johnson over par.

Other top players lurking close to the top are former world number ones Justin Thomas (-4), Adam Scott (-3), Rory McIlroy (-2), and the top-ranked John Rahm (-2). Fan favorites Matt Kuchar (-2), Bubba Watson (-1), and Ricky Fowler (Even) did not hurt their chances of playing through the weekend.

Two big names missing this year are Phil Mickelson and Bryson DeChambeau. Mickelson is warring with the PGA tour, accusing it of "greed" and darkly hinting he may join Greg Norman's Arabian tour organization. DeChambeau has also been linked with Norman's endeavor, but he has released a statement reporting that his absence from the Genesis is due to the need to rehab a hip and hand injury, and explanation supported by his recent disappointing play.

One fan favorite that will not be seen this week is tournament host Tiger Woods, still recovering from injuries he sustained in a car crash after last year's Genesis Open. At an unusually muted and somber press conference on Wednesday, Woods told the media he wanted to return to playing, but did not know when that might happen.

After appearing in a two-day father-son tournament with his son Charlie and playing reasonably well, speculation began that Tiger might be back soon. He squelched that talk at his press conference, saying he was able to play because he was riding a cart between holes. "I can play weekend warrior golf - that's easy." He can make the walk from the cart to the green and back, but he cannot yet walk the length of the course, or put in the work to hone his game.

"My right leg does not look like my left, put it that way. But I'm very lucky. I didn't know if I was gonna have the right leg or not, so to be able to have my right leg still there, it's huge." Tiger promises he'll play on the tour again, but probably not on a regular basis.

A good place to return might be the 2023 Genesis Invitational. Make your plans accordingly- but this year's event is looking promising. 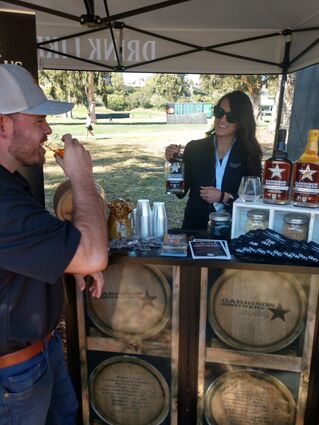 Among the fringe benefits of attending the Genesis are promotional giveaways. Ryan Autry enjoys a sample of Texas Bourbon poured by Garrison Brothers' Clara Knee.

Event information: Fans attending the tournament must show proof of vaccination or a negative Covid-19 test result within the last 24 hours from a lab antigen test of 48 hours for a PCR test. Masking is required unless actively eating or drinking. Parking is available at Santa Monica's downtown parking structures with free shuttles to the entry gate- no parking is available at or near the course.

There are no on-site ticket sales, and the event is entirely cashless. Holders of Citibank credit cards get discounts at vendors and admission to a hospitality area. There are a substantial number of food and drink sales locations on the course, a picnic area with food trucks, and many promotional pop-up stands offering samples, experiences, and games with prizes.