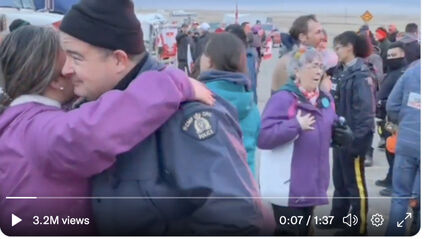 While Canadian PM Justin Trudeau has ramped up the rhetoric, not everyone in Canada feels confrontational towards the protesting truckers who have shut down the national capital, Ottawa. A video of Canadian protestors hugging RCMP police and singing "O Canada," the Canadian National Anthem, has gone a viral on Twitter. Some of the comments:

Not everyone admired the protestors. "How does it feel to be part of a movement that at this point has driven out anyone with critical thinking skills, any sense of personal responsibility, or even decency? Do you feel like you fit right in?" posted Dingbat Kabuki. 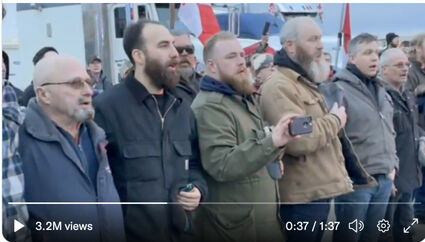 From Wikipedia: The Canada convoy protest, called the Freedom Convoy (French: Convoi de la liberté) by organizers, is a series of ongoing protests and blockades in Canada against COVID-19 vaccine mandates and restrictions. The convoy was originally created to protest vaccine mandates for crossing the United States border, but later evolved into a protest about COVID-19 restrictions in general. Beginning January 22, hundreds of vehicles formed convoys from several points and traversed Canadian provinces before converging on Ottawa on January 29, 2022, with a rally at Parliament Hill. The vehicular convoys were then joined by thousands of pedestrian protesters. Several offshoot protests blockaded provincial capitals and border crossings with the United States.

The protests are ongoing as of February 15, 2022, and protesters have stated that they will not leave until all COVID-19 restrictions and mandates have been repealed. Officials have expressed concern about the economic impact of border blockades. On February 11, Ontario Premier Doug Ford declared a state of emergency, introducing new legal sanctions on the impediment of trade routes, highways, airports, ports, bridges and railways. Prime Minister Justin Trudeau and United States President Joe Biden spoke on February 11 to discuss ending blockades at the border. On February 14, for the first time in Canadian history, the Prime Minister invoked the Emergencies Act in response to the protests.