It is increasingly clear that the Ukrainian Army is doing much better, and the Russian Army much worse, than anyone expected.

Stop the War, Ghost of Kyiv, Battle of Snake Island, and the 80 year old man who showed up to volunteer for the Ukrainian army, to fight for his grandchildren. 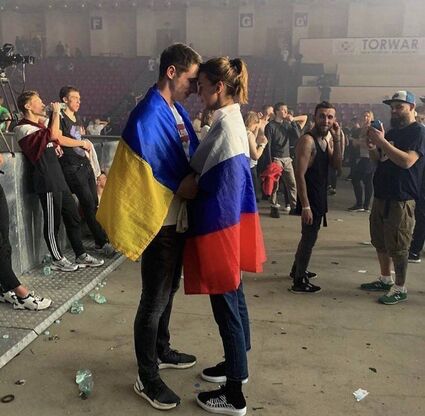 This photo of a couple embracing, she draped in a Russian flag, he wearing a Ukrainian flag, with a Caption saying "Stop the War," trending on Twitter

I'm sure you've heard of the 13 Ukrainian border guards who were urged by the captain of a Russian warship to surrender. "Russian Warship, Go Fuck yourself," said the leader who then levelled every building on 40 acre Snake Island off Odessa. Volomy Zelensky himself posted the story on Youtube, writing "I can't believe this is real.

At the Kyiv airport, Ukrainian forces captured a platoon (that's about 20 guys) of 18 and 19 year old Russian soldiers. They interrogated the young men, who said they were told that they were in Ukraine to fight Nazis. Not Ukrainians.

There is also the photo of the 80 year old man who showed up to volunteer for the Ukrainian army, to fight for his grandchildren.

Twitter really loved the story of "The Ghost of Kyiv." Supposedly a Ukrainian pilot of an SU-27 has shot down a total of six Russian aircraft. I find this less than likely, though possible. Ukraine did have 98 SU-27 fighter aircraft before the war. If it's true, the pilot would be the first European ace since World War II.