By Stanley Dunn
Special to the Observer

How do we find a way to stay unique? Distinct. Santa Monica!

Phil Brock: For the People 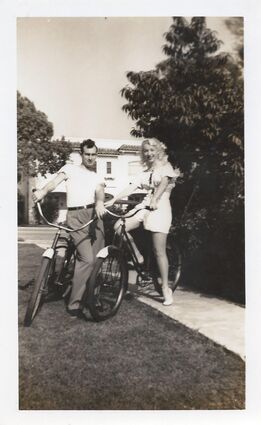 Phil's Mom and Dad on 9th Street, Santa Monica about to go for a bicycle ride.

Think back for a moment to the place you grew up. You may be living elsewhere now yet when you go back to where you are from, a rush of memories spring about. A state of nostalgia may be induced, remembering the 'good old days.' There may be some major changes such as new buildings and old hang out spots that are no longer there; yet a sense of community - what it meant to grow up there - remains.

Nestled just west of the hustle and bustle that is Los Angeles, lies Santa Monica, a place that has not lost its culture. Santa Monica is known for its beach-town feel and tight-knit vibe which is what those who call it home are proud of.

"You had a well defined community complete with its own feeling of culture and above all - a distinct difference from LA," states second generation native Phil Brock. "We knew we were not LA and we were proud of it."

Now a city council member of Santa Monica, Brock has a chance to give back to the place he has called home throughout his accomplished life. Growing up here, he attended Santa Monica High School, referred to him as Samohi, showing his respect to his roots. Now he is the President of the Alumni Association there, as well as many other local organizations.

With a wealth of knowledge about the city's history, Brock portrays an understanding of what it means to live and be a citizen here. Now he has an ability to make an impact here as he has seen the city develop and change firsthand. This change was most prominent a few years ago.

After witnessing the historic violence and looting that was happening during the height of the pandemic on May 31st 2020, he was disappointed and had a loss of hope in the city. This affected him greatly as he saw his mother who grew up here almost give up as she wanted to move from the place she called home her whole life. This sparked a fight or flight response in him that led him to fight for change. Seeing many flaws in the system, he knew he had to do something for the people.

"So, I ran for city council because the people were so frustrated and upset. I captured their imagination and votes because I was clear about who we were, what we stood for in the city and how to make sure we didn't just 'blend in with LA.' How we didn't just give up, rollover and say, 'Yeah, there will be 20 story buildings all over the city.' Instead we were going to look at it and say, 'How do we find a way to stay unique? Distinct. Santa Monica'"

"I want to see us celebrate the people that live here... and all the great things we have done here," he stated.

As a former President of The Boys and Girls Club Council, he also won the Santa Monica Elks Lodge Citizen of the Year Award in 2018, showing his loyalty to the community even before he ran for office.

"When charities or others in the city need help, I am always there ready to help" he stated.

Amidst these crazy times where small businesses are struggling to keep up with the current status of the pandemic and economy, people like Phil Brock represent a breath of fresh air to reassure the people that it will be okay.

"With the consolidation of businesses, we lose those individual characteristics of business and community," he stated.

Referring to the small business hangout spots where he grew up, he wishes people these days will have similar experiences where they are able to go to a place and gather with an almost small town vibe. Santa Monica is in great hands having a city council member that cares for the people. Brock understands that the focal point of the community lies in the residents themselves. "The question is, do we look within as we look outwards and say: here's who we are - here's who we want to be, while adapting; or do we say 'Eh, let's just blend in and we'll be the beachside high rise area of LA.' I think we have an important choice to make," he stated.

Throughout the interview on a morning stroll, Brock said good morning to a handful of people and had an informative yet gregarious conversation with a gentleman who was on the wrong side of the concrete barrier fence to the Palisades cliffs. Reflecting on his own life, he told the man about how he used to hang there when he was in college, yet now it is illegal. Brock even told a story to the gentleman about how his parents met near there, showing his ability to relate with the residents while providing a safe space. Creating personal connections with the community, Brock demonstrates how a noble city council member is able to keep Santa Monica culture alive. He is creating not only change for those in city hall, but change for the community as a whole.

"It's not only a rebirth of Santa Monica, as we not only wish to recover what we had, but to enhance the city as a whole," he stated. "The difference is - how do you keep change in relation to the city? Does it have a well defined meaning?"

This sense of meaning is what Phil Brock is all about, how to keep the people happy not only in regards to their culture but to their professions as well - and he has done his research. According to Brock, 41 percent of the population work in entertainment and the arts. As a voice for what the people want, Brock is an advocate for these very nuances that make Santa Monica home for so many. This can be seen by his wish to create an art walk for the public on Olympic Blvd. Instead of keeping art and certain professions under wraps that may seem obscure to the general public, Brock wants to make a statement that shows what Santa Monica is all about: the people who call it home that makes it the vibrant place it is today.

"How do we help people thrive - housed or unhoused? How do we make the people feel safe?" he stated.

Another aspect he wishes to solve is the abrupt use of force by police efforts that may cause a distrust in the homeless population. Instead, he has advocated for adding women to the street team to alleviate violence, to communicate daily with the homeless and provide resources for them such as mental health referrals before someone dials 911 or they end up in jail. Using his own experience living in the city, his efforts are making the city a place of meaning once again. Referring to a homeless woman who passed away on a bench recently, he stated, "All these things affect me... it makes me passionate, otherwise I wouldn't care."

Bringing back that sense of community - no matter the situation the residents are in - provides a safe and welcoming atmosphere for those who wish to move here.

Brock wishes those who move here will create families rather than just come and go, to perpetuate more generations of Santa Monicans that will be proud of their city. With this philosophy, one can see how Brock brings passion into his role as a city council member with a humble sense of pride.

"Many previous council members thought, how do I stay in office - versus, what can we do for the city? Phil asks, "Are we listening not only to business interests but to neighborhoods? Are we listening to people in all parts of the city and trying to help them or are we saying 'who cares?'"

It may seem like people in power are sometimes not on the citizens' side, yet this is not the case with Phil Brock. There was even a vote to build a high rise apartment building on historic land, something which he opposed. Instead, Brock proposed a public park. Fortunately, the high rise was never developed yet neither was the park. These instances show the determination he brings to his role.

What is astonishing is his down to earth attitude which surprised me throughout this interview, which you can listen to down below...

He is onto something which may be lacking in today's politicians.

Brock has created his own legacy in this city that he continues to promote as he was elected to office to create sustainable resources for the residents individually instead of just for political achievements such as allowing real estate investors to build high rises and opening the market for big companies. Instead, Brock comes with a more whole-hearted approach to fulfilling the citizens' needs. 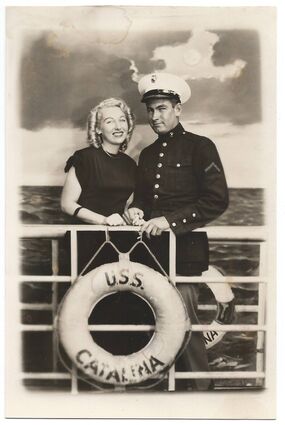 Change seems inevitable due to the technological communication that is making local communities lose sight of what they were about before. Yet the people themselves are what make this sense of camaraderie that shapes the ambiance of Santa Monica into the beachtown it is today. In busy cities like Los Angeles, people may be lost, trying to find themselves in a world that seems hard to fit in. People seem to be on the go amidst the big city life, which is where Santa Monica can be a breath of fresh air and shine its rays, letting the citizens know why they are there.

"Santa Monica has the opportunity to always shape its own destiny," he stated.

The communal vibe Santa Monica emits gives people a sense of meaning in a world that often forgets to slow down and have fun. Relating with others on a much deeper level through this communal force, creates a positive space where anyone can go to feel a sense of belonging and creates its own sense of identity. This is where the nostalgia comes back and let's you feel at home in the city of Santa Monica.Where else will you run into a city council person on a casual morning walk?

It's sad that Mr. Brock doesn't see Santa Monica and the sleepy little beach city it once was is gone and irretrievable. He's 3-4 decades late and a billion dollars short. Santa Monica is now a very weird combination of a woke joke and a corporate and developers wet dream. I've been here as long as he has and I know the city has lost all it's character and it ain't never coming back. Wake up and smell the urine soaked reality Phil...