Lukashenko is a dictator closely aligned with Russian President Vladimir Putin, so the promise seems unlikely to be fulfilled, and perhaps intended for Belarusians who are uneasy about their country's role in the Russian invasion. Many Ukrainians speak Russian as a native language, including Zelensky himself. Below is a translation from Russian of the article:

"Ukrainian President Vladimir Zelensky spoke about the details of the conversation with the self-proclaimed head of Belarus Alexander Lukashenko. The politician said that Lukashenka assured him that troops would not go to Ukraine from the territory of Belarus.

1. Lukashenko vowed not to attack Ukraine; 2. Zelensky said he did not believe in the outcome of the talks with the Russian delegation; 3. the Ukrainian military will be paid 100,000 hryvnias a month ($3,400) until the war is over; 4. Ukraine will build a new Mriya, a large transport aircraft destroyed yesterday by Russian artillery.

Zelensky said that Lukashenko himself approached him with a proposal that the Ukrainian and Russian delegations meet on the Pripyat River without any conditions.

"I'll say frankly, as always: I don't really believe in the result of this meeting , but let them try. So that later not a single citizen of Ukraine would have any doubt that I, as president, did not try to stop the war when the chance of peace was small, but still there was a chance ," the head of state said.

Zelensky also said that Ukraine would pay 100,000 hryvnia per month to the military who hold weapons in their hands . "Not for "thank you", but in order to know that the country is grateful to them. It will be so until the war is over ," the president said. 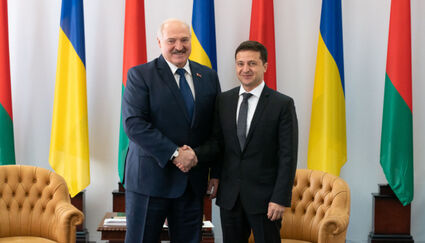 A 2019 file photo of Volodymr Zelensky and Belarus Pres. Lukashenko

He also confirmed that the Russian invaders destroyed one of the largest and most powerful aircraft in the world, Ukrainian-made AN-225 Mriya."

The New York times translated Zelensky's video as follows: President Volodymyr Zelensky said he received "assurances" from his Belarussian counterpart that "missiles, planes and helicopters" would not fly to Ukraine from Belarus ahead of negotiations that will take place on the border between the two countries.

"I will say frankly that I do not really believe in the outcome of this meeting, but let them try to make sure that no citizen of Ukraine has any doubt that I, as a president, did not try to stop the war."