Heroic Border Guards on Snake Island Were Not Killed, But Captured and Taken Alive and Well to Crimea, Russian Navy says.

Heroic Border Guards on Zmeinyy Island Were Not Killed, But Taken Alive and Well to Crimea, Russian Navy says.

You have no doubt heard the story of 13 brave border guards on Snake Island, 20 miles or so South of the Ukraine coast. When a Russian frigate captain told the border guards to surrender for their own safety, otherwise he would drop a bomb on them, they told the captain to "fuck off." He then blew them all up 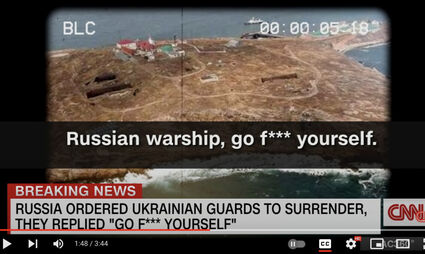 Heroic Border Guards on Zmeinyy Island Were Not Killed, But Taken Alive and Well to Crimea, Russian Navy says.

Not so, says RT.Com. The border guards were in a group of 83 border guards, transported by Russian navy to Sevastopol in Crimea on February 24th. The 13 are alive and well, says RT.com, a Russian website with an English language edition. The story is at: https://www.rt.com/news/550717-snake-island-guards-surrendered/

"The Russian military has claimed that Ukrainian border guards, whom Ukraine initially declared entirely slain, survived, while Kiev's military concurred that it might indeed be the case.

"Both countries' armed forces on Saturday said that a group of Ukrainian border guards stationed on Zmeinyy (Snake) Island, located some 48km off Ukraine's southern coast in the Black Sea, were captured by Russian forces. Russia says they were taken alive and unharmed to Sevastopol in Crimea."

"RT is an autonomous, non-profit organization that is publicly financed from the budget of the Russian Federation," says the About Us section of RT.com.