With her PhD in Social Welfare, Ferrer is more comfortable discussing equity issues and so lost the ball in the act of trying encourage vaccinations or justify vaccine mandates 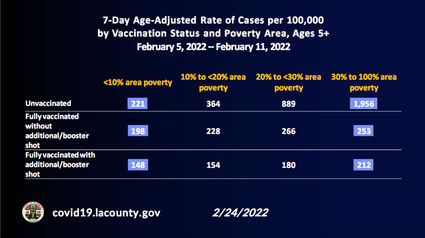 Cases by poverty level as well as vaccination status

February 25, 2022 - At her weekly press briefing on Thursday, Dr. Barbara Ferrer, PhD, MPH, MEd, Director of Public Health for the County of Los Angeles made the case that wealth, rather than vaccine status, appeared to be a causal factor regarding Covid-19 case rates, hospitalizations, and deaths.

In a series of three stunning slides, Ferrer showed that unvaccinated wealthy people were less likely to catch Covid, get hospitalized, or die compared to fully vaccinated poor people.

So wouldn't it make as much sense to mandate wealth rather than vaccines in order to slow the spread?

The slides made a strong case that wealth, and whatever benefits that might bring, such as being able to work from home or having better access to health care, had as much, if not more of an effect on Covid-19 transmission numbers and hospitalizations than vaccines did. Vaccines "are not an equalizer," Ferrer said. 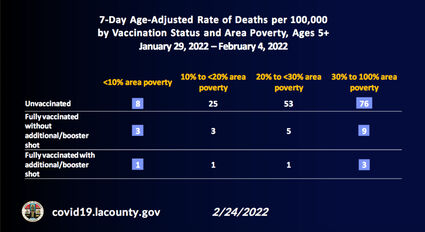 While Ferrer's slides show that vaccines can help in preventing hospitalizations and deaths even for poor people, they also indicated that her main rationale for instituting vaccine mandates makes no sense. Her goal is to slow transmission because she thinks that is where variants of concern might arise (not in South Africa, for example.) But even if the poor got vaccinated, there is still going to be a great deal of transmission in poor neighborhoods, either because people in these neighborhoods have jobs that require a great deal of exposure to others or for other reasons. As she said herself, vaccines aren't going to do the job.

So many other factors play into the transmissibility of Covid-19 than whether or not one is vaccinated, and vaccines are statistically proven to do little to prevent transmission. So unless Ferrer wants to exclude people who come from neighborhoods with more than 30% poverty, she should give up on any sort of mandates at all. They are ineffective, costly, and damaging to our social fabric.