Claims that the Russians are holding 40 hostages at northern Kyiv's Hostomel airport. 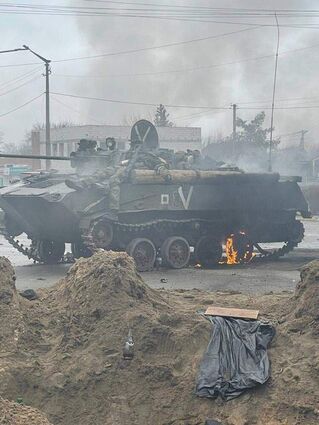 Some of the finest war photography tweeted in the Russo-Ukraine war, is by a reporter for the Kyiv Independent named Illia Ponomarenko. He posted this photo of Russian soldiers sprawled out on the top of a tank, from a village outside of Kyiv.

He also claims that Russian soldiers are keeping 40 civilians as hostages near the Kyiv airport. "In this residential compound in Hostomel, Russia's 31st Airborne Brigade troops are right now holding nearly 40 civilians hiding in the basement. No comms with any of them yet. We need to rescue the hostages," he tweeted.

He points out that Former US President Barack Obama apparently reads the Kyiv Independent, his newspaper, based on this Obama.org post: https://t.co/RYku9L8zlM