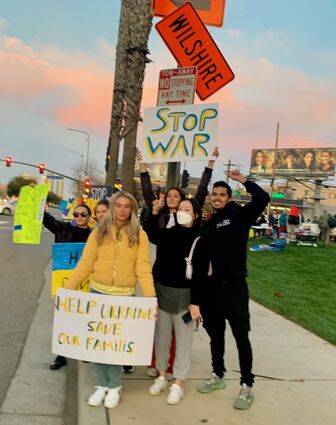 "This is the beginning of World War III," said one UCLA student named Illia, who was participating in the event on Santa Monica Blvd and Sepulveda. "You guys just haven't figured that out yet," he said grimly.

Other demonstrations took place in Westwood Village, near the Santa Monica Pier, and on the Third Street Promenade.

One place where demonstrating is illegal is Moscow. Authorities there have arrested 8,000 people, who may be subject to 15 years in prison under newly adopted laws.

As Russia continued its attack on Ukraine, Santa Monica City Hall on Saturday night lit up in yellow and blue, the colors of the Ukrainian flag.

"Angelenos stand with our Ukrainian brothers and sisters," LA Mayor Eric Garcetti tweeted in sharing a photo of LA City Hall, which was also lit up in Ukraine's colors.

Local landmarks were among others across the globe - including Empire State Building in New York City, the London Eye and the Eiffel Tower in Paris - to be illuminated in yellow and blue in a show of solidarity.

I have several Russian friends who are well connected in Russia. They universally blame the Ukrainians for the invasion, blaming Ukraine for threatening Russian speakers in Eastern Ukraine, or of attempting to develop chemical weapons.

Experts say the war may last for months or even years, and grow to involve other countries. NATO recently refused Ukrainian pleas to get involved, saying that the imposition of a no fly zone would involve NATO forces shooting at Russian jets. 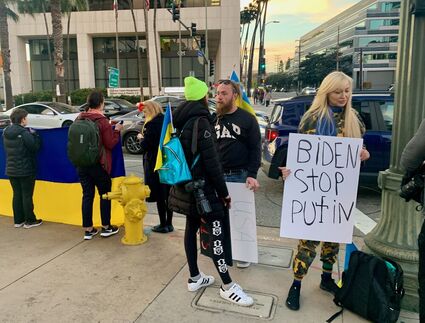 Ukrainians accuse the Russian forces of war crimes including targeting civilians, and committing murder and rape of civilians. Some captured Russian soldiers, often Boys of 18 or 19 years, say they were not even informed in advance where they were going, or that they would be involved in combat.

The Ukrainians share a common history. When the Soviet Union collapsed in 1989, Ukraine found itself independent. Putin has referred to the Soviet collapse as "the greatest geopolitical catastrophe of the 20th Century.

On Wednesday, the Russian Armed Forces admitted to around 500 casualties. The Ukrainian military, which also acknowledges about 400 casualties themselves, claims to have killed over 6000 Russian servicemen. Some experts regard this as an obvious exaggeration. But NBC reporter Richard Engel, who has been on the battlefield in Ukraine, considers the 6000 casualty figure completely credible.