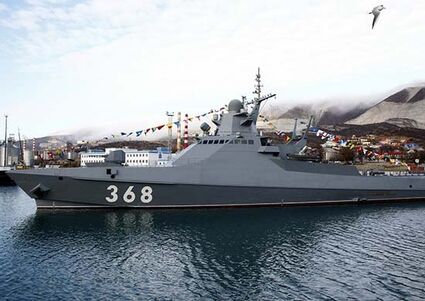 Vasily Bykov shortly after she was launched.

Ukrainian forces say they have sunk the Vasily Bykov, the Russian warship that was immortalized when the border guards of Snake Island defiantly told it to "go eff" itself.

The Ukrainian navy lured the patrol boat with another seemingly vulnerable boat. They then opened fire with a hidden onshore battery.

Vasily Bykov was commissioned on 20 December 2018 in the Novorossiysk Naval Base [ru], becoming part of the Black Sea Fleet.

The ship participated in the attack on Snake Island on 24 February 2022 during the first day of the 2022 Russian invasion of Ukraine together with the Russian cruiser Moskva. This confrontation ended in the Russian takeover of Snake Island.

On 7 March 2022, Ukrainian sources claimed that the Armed Forces of Ukraine had used a Multiple rocket launcher system to hit the Vasily Bykov with rockets off the coast of Odessa, heavily damaging or even sinking her. Ukrainian Navy officers later stated that the "ship was destroyed, it is confirmed". Ukrainian media published videos which reportedly showed the burning Vasily Bykov in the Black Sea.