100 years to the day since Shackleton was buried, Endurance has been found.

Ship said to be in amazingly preserved condition, after 105 years below the Antarctic sea. 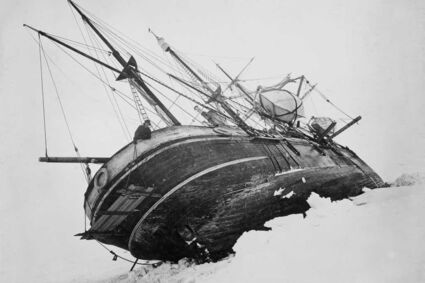 Historic photo of the Endurance locked in the ice.

100 years to the day since British explorer Ernest Shackleton was buried, the Endurance has been found. Working in the Weddell Sea, she was discovered at 3000 meters depth on 5 March 2022, announced the National Geographic Survey.

Built of Scandinavian pine and oak, the Endurance was crushed by the ice in 1915. This was filmed by the crew in 1915, amazingly.

"I have been thinking much of our prospects," Ernest Shackleton wrote in the austral spring of 1915, adrift in the Weddell Sea pack ice. Shackleton is most famous for rowing a boat with his crew to South Georgia Island, some 600 miles across a frozen sea. Then hiking by himself over the mountains of South Georgia Island, and reporting the location of the rest of his crew, to a whaling station. 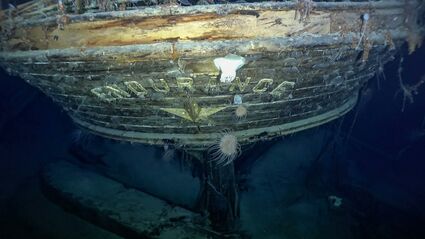 100 years to the day since Shackleton was buried, Endurance has been found.

After the race to the South Pole ended in December 1911, with Roald Amundsen's conquest, Shackleton turned his attention to the crossing of Antarctica from sea to sea, via the pole. To this end, he made preparations for what became the Imperial Trans-Antarctic Expedition, 1914–1917. Disaster struck this expedition when its ship, Endurance, became trapped in pack ice and was slowly crushed before the shore parties could be landed. The crew escaped by camping on the sea ice until it disintegrated, then by launching the lifeboats to reach Elephant Island and ultimately South Georgia Island, a stormy ocean voyage of 720 nautical miles (1,330 km; 830 mi) and Shackleton's most famous exploit. In 1921, he returned to the Antarctic with the Shackleton–Rowett Expedition, but died of a heart attack while his ship was moored in South Georgia. At his wife's request, he was buried there.

Endurance was the three-masted barquentine in which Sir Ernest Shackleton and a crew of 27 men and one cat sailed for the Antarctic on the 1914–1917 Imperial Trans-Antarctic Expedition. The ship was launched in 1912 from Sandefjord in Norway; three years later, she was crushed by pack ice and sank in the Weddell Sea off Antarctica. All of the crew survived.

The wreck of Endurance was discovered on 5 March 2022, says Wikipedia, 107 years after it sank (and the 100th anniversary of Shackleton's funeral), by the search team Endurance22. It lies 9,869 ft (3,008 m) deep, and is in good condition. It is designated as a protected historic site and monument under the Antarctic Treaty System.