"Don't Believe Propaganda," is all that the poster now says. But at least the Russian public knows what happened 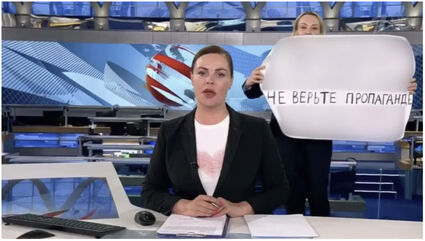 Novaya Gazeta decided to remain open after other liberal Russian news publications, such as "Rain" TV network, closed. But they said they could not cover Russia's special operation in Ukraine, due to a recent law that could make publishers of "fake news" liable for 15 years in prison.

They are, as far as we know, the only Russian language news source to have published a photo of Marina Ovsyannikova as she walked into the camera frame with a protest poster during a live broadcast.

In order to put Ovsyannikova's photo online, they censored what she said to "Don't Believe Propaganda." Methinks they wanted to make the point that the Kremlin is keeping the truth from the Russian public.

The article from Novaya Gazeta is entitled "Photo of the day. Girl with a poster on Channel One." It reads: On the air of the Vremya program, behind the back of the host Ekaterina Andreeva, a girl appeared with a poster, the full content of which we are forbidden to transfer to Roskomnadzor and the Criminal Code.

According to unconfirmed information, this is the editor Marina Ovsyannikova. She is currently under arrest. Link to Novaya Gazeta: https://novayagazeta.ru/articles/2022/03/14/foto-dnia-devushka-s-plakatom-v-efire-pervogo-kanala

The TASS news agency later published a brief statement to Telegram that Channel One was investigating an incident where an outsider appeared on the camera frame during a live news broadcast.