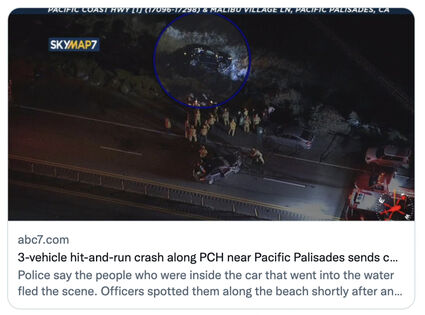 Three vehicle accident on PCH in Pacific Palisades on 3.17.22

3.17.22 A three car collision on Pacific Coast Highway caused a car to roll into the sea on Thursday night just before 10 pm PST. After the vehicle rolled into the ocean, the driver and 2 passengers ran up the beach. The driver was captured later by police.

Police took one man to the hospital, he is reported in stable condition. The driver is in custody. Police closed 2 lanes of PCH following the accident.