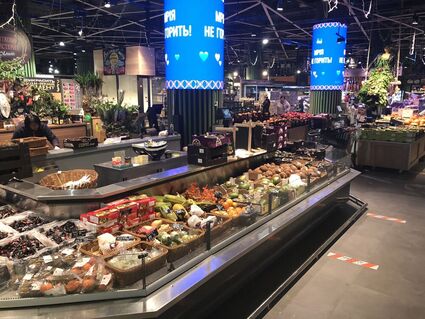 And this is a grocery store today in Kyiv.

3.18.22: The West has imposed sanctions on Russia for its attack on its neighbor Ukraine, and this has apparently had some effect. Adam on Twitter has posted contrasting images of supermarkets in Kyiv and in Moscow.

A friend in Russia was in the supermarket last night and sent me this photo," tweeted Adam. 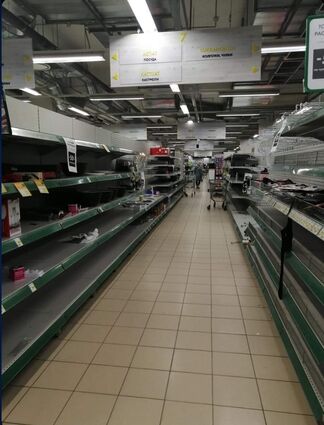 "A friend of mine sent me this photo from Moscow."

Others report a blooming black market in Russia. Stores in Moscow and e-commerce are freezing prices on some goods, Russian Telegram channels reported. Luxury brand stores carrying Western brands such as Christian Dior, Chanel, Luis Vuitton, Prada and Versace are now empty in Moscow malls. "Hearing from several friends that there are now limits in Moscow grocery stores on how many items a person can buy at a time. Back in the U.S.S.R.", tweeted Julia Ioffe. Nike apparently remains open, while Adidas has closed.

Nestle is reportedly still selling its products in Moscow. Some in the West have called for a boycott of the food manufacturer.

Pizza chain #PapaJohns is facing heavy criticism after a U.S. franchise operator in Russia refused to close 190 stores, even after the company said it would suspend all corporate operations there after Moscow’s invasion of Ukraine.