Update 3.27 Wall it was initially reported that the Orsk had been sunk, it was in factor sistership Saratov that was hit. “At 7:45 AM, a Tochka-U SRBM was fired towards the landing ships Saratov, Tsesar Kunikov, and Novocherkassk. To avoid an explosion, Saratov sunk at a depth of 5 meters. Kunikov and Novercherkassk left port damaged. 8 killed on Kunikov and 3 killed and 3 injured.”

3.24.22: In another significant development in the Russia Ukraine war, the Ukrainian Navy claims to have destroyed a Russian landing ship filled with ammunition in occupied Berdyansk harbor. They posted a vide on facebook, showing the Orsk on fire, with explosions going off.

"In the port of Berdyanks captured by the Russian Federation, the large landing ship Orsk of the invaders Black Sea fleet was destroyed" tweeted one local journalist. 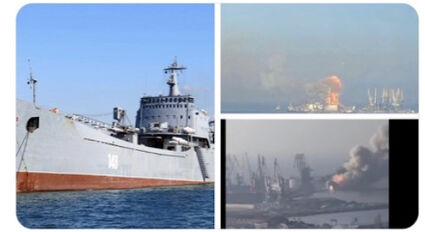 "In the port of Berdyansk, captured by the Russian Federation, the large landing ship Orsk of the invaders Black Sea fleet was destroyed."

The Ukrainians said 3 weeks ago that they had sunk three Russian patrol boats. The Russians claim to have secured the port of Berdyansk. They were in fact so sure of it, that they had a Russian TV personality visit Berdyansk 2 days ago. He broadcast there "from demilitarized Berdyansk."