One of the members of that delegation was oligarch Roman Abramovich. He has been openly critical of Putin's invasion of Ukraine. 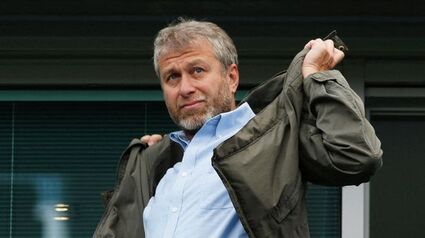 Roman Abramovich at the Chelsea club

Bellingcat says that three members of the delegation attending the peace talks between Ukraine and Russia on the night of 3 to 4 March 2022 experienced symptoms consistent with poisoning with chemical weapons. One of victims was Russian entrepreneur Roman Abramovich, who has been critical of Putin over Ukraine. The Wall Street Journal has also published the story. https://www.wsj.com/articles/roman-abramovich-and-ukrainian-peace-negotiators-suffer-symptoms-of-suspected-poisoning-11648480493?mod=e2tw

The Russian Governement under Vladimir Putin has used poisoning in the past. Opposition leader Alexei Navalny was poisoned and nearly died, prior to the FSB arresting him. He's been in prison for five years since. Russian opposition figure Boris Nemsat was tailed by someone prior to being murdered.

Ukrainian authorities dismissed the report as speculation. "The Wall Street Journal reported that three participants of the Ukraine-Russia talks on March 3 in Belarus had experienced symptoms of suspected poisoning. They include two Ukrainians and Russian oligarch Roman Abramovich. In a comment to Hromadske news outlet, Mykhailo Podoliak, an advisor to presidential administration, dismissed the allegation as “speculation,” adding that all Ukrainian negotiators “are working as usual.”" This from http://www.kyivindependent.com

Roman Arkadyevich Abramovich is a Russian–Portuguese–Israeli billionaire, philanthropist, oligarch, and politician. Abramovich is of Jewish origin and he is the primary owner of the private investment company Millhouse LLC. He is best known outside Russia as the owner of Chelsea, a Premier League football club. Wikipedia.

Bellingcat is a Netherlands-based investigative journalism group that specialises in fact-checking and open-source intelligence.