"Putin's Best Friend in Ukraine" had been under house arrest on February 24th, but somehow escaped police custody a few days later. 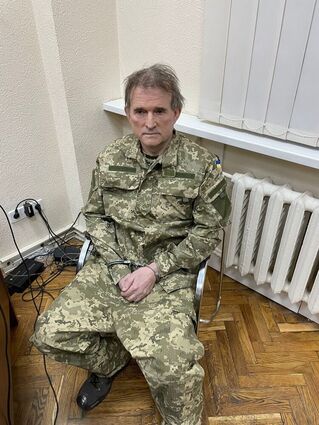 The Security Service of Ukraine (SBU) released a photo of Viktor Medvedchuk in police custody. "Putin's Best friend in Ukraine" as he is known, is seen in handcuffs and wearing a military uniform. 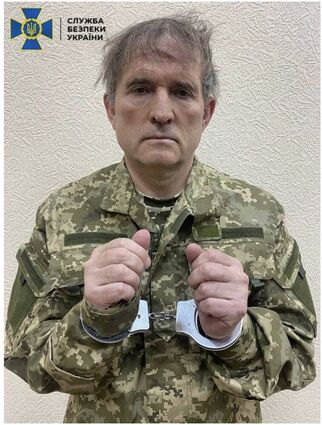 Medvedchuk, 67, is a Ukrainian politician, lawyer, business oligarch, and current People's Deputy of Ukraine as of 29 August 2019, says Wikipedia. He is the chairman of the pro-Russian political organization Ukrainian Choice and an opponent of Ukraine joining the European Union.

He had been under house arrest on February 24th, but somehow escaped police custody a few days later.

"Medvedchuk, the godfather to Putin's children, is a highly controversial figure inside Ukraine. (president before Zelensky) Pyotr Poroshenko used him as a conduit to Putin. Zelensky blocked his media and put him under house arrest." tweeted Alex Carroll.

"Medvedchuk was for years Russia's main agent in Ukraine," tweeted Oleksiy Sorokin, a journalist at the Kyiv Independent. "He bolstered his connection to Putin, he visited the Kremlin and depicted himself as the main pro-Russian force in the country. The Russians didn't even give him a heads up before invading, and he's arrested by the SBU."