Photos of Cruiser Moskva After Being Hit by Ukrainian Missiles But Before Sinking, Emerge

Images show the ship listing to port, with signs of extensive fire damage around the central superstructure with her life rafts missing 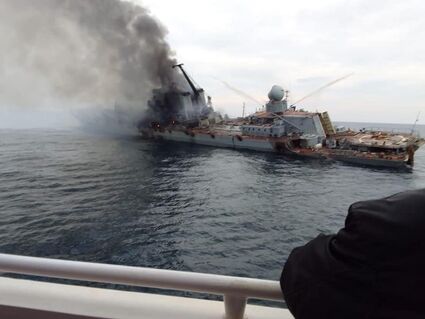 Photo of Cruiser Moskva After Being Hit, But Before Sinking, Emerges

A photograph of the Russian cruiser Moskva has emerged, during the 48 hours after being hit on April 14th, but before sinking. In the photo, the stricken ship displays missing panels on her sides, such that one can see the second deck. Smoke pours out of the superstructure in the aft of the ship.

From Wikipedia: "On 18 April, two images circulated on social media showing Moskva after the alleged missile strike/ammunition fire and prior to the final sinking. The images show the ship listing to port, with signs of extensive fire damage around the central superstructure, and most of the ships life rafts missing, indicating the crew had evacuated by this point." https://en.wikipedia.org/wiki/Sinking_of_the_Moskva

"I can't verify the authenticity," tweets OSINT Technical, a recognized authority on Russian and Ukrainian military equipment. "But this is a Slava class cruiser and I don't think any of them have been destroyed in this manner."

"There is a discrepancy between the reported photo date of 4/15 and the Russian reported sinking date of 4/14," he adds. 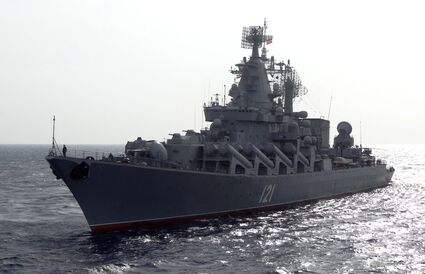 File photo of the Russian Cruiser Moskva in 2015

"So theory of hit from bow side seems legit now," tweeted @WarInUkraineYet, Replying to @Osinttechnical. "The front side, Helipad and Radar, look about correct. Sadly any identifiers are either submerged or on the other side. This looks legitimate but it isn't a smoking gun."

Meanwhile, VK users report their relatives who served onboard Moskva, which 🇺🇦 sunk 13 Apr, are being filed as MIA" tweeted Euromaidan press.

"Built in the 1970's and 1980s during the Soviet Era, the Cruiser Moskva was 611 feet in length and weighed 12,400 metric tonnes. She had a crew of 510, but it's not clear how many were lost in last week's sinking. The Russians have said she had a fire and ammunition explosion. The Ukrainians say they hit the Moskva with 2 Neptune missiles, causing her to roll over and sink 24 hours later.