It was first reported in November 2020 that Russian President Vladimir Putin has Parkinson's disorder. The 68 year old has grown increasingly pale and seems strained during public appearances. In a recent televised interview, he was seen to be gripping the edge of a table, as if fearing his hands would start to tremble and reveal his condition to a hostile world.

Video tape is making the rounds of a recent televised meeting between Defense Minister Sergei Shoigu and Putin where officially he hailed Russia's "liberation" of Mariupol after his forces completely destroyed during a two-month siege. He told defense minister Shoigu to block off the Azovstal metallurgical plant, where the last Ukrainian troops are holed up, "so that a fly can't get in." But Putin grips the edge of the table with both hands, as if afraid they will reveal his condition.

A long quote from Britain's Sun newspaper, which claims to have Moscow health care sources, follows. It's from November 2020. Observers who studied recent footage of Putin noted his legs appeared to be in constant motion and he looked to be in pain while clutching the armrest of a chair.

His fingers are also seen to be twitching as he held a pen and gripped a cup believed to contain a cocktail of painkillers.

Speculation that his 20-year-reign - second only to that of Stalin - could be nearing an end grew earlier this week when laws were drafted to make him a senator-for-life when he resigns.

Legislation introduced by Putin himself was being rushed through parliament to guarantee him legal immunity from prosecution and state perks until he dies. 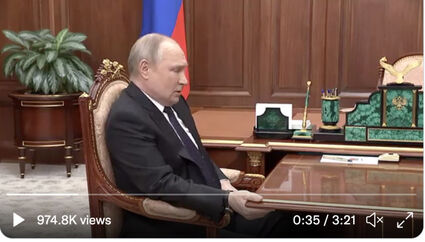 The academic said he also understood Putin's undisclosed partner Alina was pressuring him to quit - along with his daughters Maria Vorontsova , 35, Katerina Tikhonova, 34. Solovei said: "There is a family, it has a great influence on him. He intends to make public his handover plans in January".

The professor predicted that Putin would soon appoint a new prime minister who would be groomed to become his eventual successor.

And back in 2015, a team of researchers at he Department of Neurology, Radboud University Medical Centre, Nijmegen, The Netherlands headed by Professor Bas Bloem identified signs in Putin's gait which could point to Parkinson's.

The researchers spotted how the Russian strongman walks with his left arm unmoving, almost pinned to his side, while his right arm swings freely.

Pictures of the President giving speeches also show him with his right arm resting casually an a lectern, with his left straight by his side.