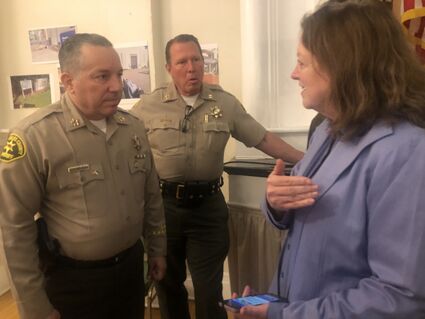 Sheriff Alex Villaneuva spoke at the Santa Monica Bay Women's Club on April 21. He was asked to contrast whether the SMPD's response to the George Floyd riots of May 31, 2020 was adequate or not.

He said that the City's response to the rioters was too soft, "too woke," and that the City of Santa Monica called the Sheriff's dept for back up after two hours. "They should have called us immediately, like Beverly Hills did. Santa Monica could have avoided damage with our help," he said.

"It's a tough profession," said Villaneuva. "A lot of local police chiefs lost their jobs due to their response to the civil unrest in 2020. Some people went over board on one side, others on the other side like in Santa Monica."

“According to Villaneuva, Santa Monica’s political leadership instructed the SMPD to stand down. Everybody assumed that was the case, but no one had ever said that out loud before,” said Wes Wellman, who attended the meeting. “To me that’s the biggest news. When they arrived, police were instructed to go to a lifeguard station, rather than to the Promenade (where the rioters were). Villaneuva added the SM political leadership said, they’re just destroying property, and the property was insured.”

"We had two places where they tried to loot and riot within our Sheriff's jurisdiction. One was the Lakewood mall, they tried to vandalize and set it on fire. 31 people went to jail there. They tried the citadel. We pretended that we were leaving. Capt. Thrall and company We kind of circled behind them as if we were leaving, then "surprise!" and arrested 51 people," he said to a round of applause.

"If the mayor tried to tell me to let the City burn down, I would say, sir you can fire me tomorrow. But tonight the City is going to stay," AV said.

Villaneuva was asked about the famous tension between him and the 5 member board of supervisors. "That's a loaded question!" He joked.

"As most of you know, former Supervisor Mark Ridley Thomas was indicted for 20 counts of Federal corruption. He was also the supervisor who lead a campaign to discredit me. And now he's facing a 20 count indictment. I can't distinguish that indictment from what supervisors do every day. Looks the same to me," Villanueva joked.

Villaneuva earlier had said that the Board of Supervisors could be improved by doubling the number of members from 5 to 10, having a separately elected County Mayor who could break ties. He said the County should have "an inspector general" who is separately elected and has the power to investigate corruption. 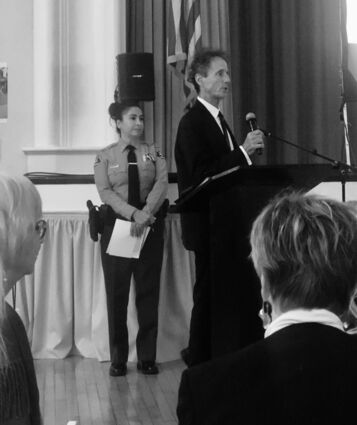 John Alle explains why the City Council were largely absent.

Villaneuva pointed to the empty seats set aside in front of the audience for the Santa Monica City Council. Only Councilmember Phil Brock was in attendance.

Local businessman John Alle stated that every member of the City Council had been invited to attend in advance. Some, he implied, didn't want to hear Sheriff Villaneuva's message on crime and homelessness.

Villaneuva took credit during the meeting for clearing the homeless out of the area adjoining the Veteran's Administration on San Vicente, and clearing them out of Venice Beach. He emphasized that this had to be done person by person, "because each homeless person is in that situation for a different reason, with a different story." He praised the work of non government organizations such as churches and charities, in working to alleviate the homeless problem locally.