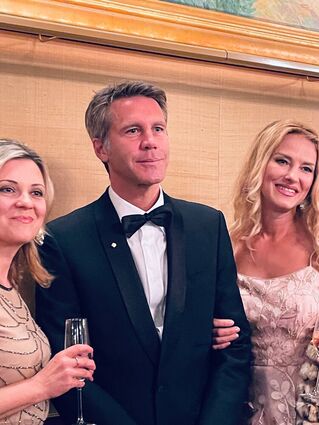 Hereditary Crown Prince of Italy Emanuele Filiberto with a couple of admirers, at a charity event in downtown Los Angeles.

4.9.22: Savoy is a region in France. But for an evening, you could find the Prince of Savoy at a charity event in DTLA.

The Guest of Honor was His Royal Highness the Hereditary Crown Prince of Italy Emanuele Filiberto of Savoy, Prince of Venice and Prince of Piedmont.

The Caterina's Club, Savoy Orders beneficiary in Los Angeles mission is to provide warm home cooked meals, affordable housing assistance and job training to homeless and low-income families and individuals. This wonderful vision was started by Chef Bruno Serato, a Savoy Cavaliere, who began serving healthy warm meals to underprivileged children to their after school programs to give love and consistency to these children's lives The Caterina's Club now feeds healthy meals to 5,050 a night in 30 different cities operating out of 104 locations across Orange County and Long beach 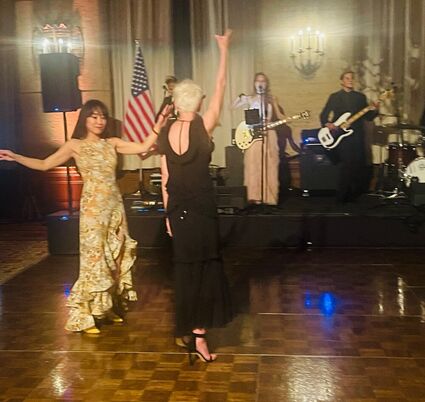 Dancing at the event.

The American Delegation of Savoy Orders is headquartered in New York City, which includes all 50 of the United States of America, is among 35 delegations of the Savoy Order located throughout Europe, the America's and Japan. The Chivalric Savoy Orders of the Royal House of Savoy date back over 1000 years, long before the members of the Savoy dynasty became kings of a united Italy in the 19th and 20TH centuries. The Savoy Foundation has funded numerous charitable grants to aid children's causes, hospice care for the poor, sick, ambulance purchases and emergency relief assistance.

The Prince now who now lives in Monte Carlo, has 2 beautiful daughters going to school in England but comes to Los Angeles frequently to visit his Italian restaurant the" Prince of Venice" in Westwood. The"Notte di Savoia Los Angeles" was a very elegant and fun filled evening, with cocktails, dinner, live musical performances, dancing and even an opportunity to meet a real Prince.

For more information: The American Foundation of Savoy Orders, Incorporated may be found online at: http://www.savoia.org