US Supreme Court to Overturn Roe vs. Wade Opinion on Abortion, according to Leaked Opinion.

"Roe was egregiously wrong from the start" and that "we hold that Roe and Casey must be overruled." 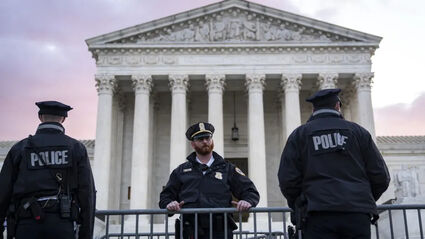 Police setting up barricades in front of the Supreme Court building in Washington DC on May 2, 2022, after a leaked opinion seemingly overturned Roe vs. Wade.

The US Supreme Court is all set to overturn the restraint on Abortion law contained in the 1972 Roe v. Wade decision.

This according to Politico.com, who claims to have obtained a leaked draft of the opinion. The leaked nature of the opinion is itself without precedent. "Chief Justice Rehnquist said to us" said Laura Ingraham, who clerked for him in the 1990's" He looked at us and said, if you leak anything from this court, you can kiss your legal career goodbye." She added that a clerk who disregarded this rule and crossed the line to take it upon himself or herself to usurp the role of the justices and hijack the deliberative process," should not only be fired but disbarred, Ingraham said. "It looks like once again, the left will once again smash a legal process to get their way."

"The only island in the sea of Washington which did not have leaks, was the Supreme Court," said professor Jonathan Turley. "It seems like there is no institution which can survive the age of rage. I think the Court will never be quite the same. This was a malicious act and the only reason to leak it was to try to create external pressure on the court. The justices are more likely to dig in and not cave to external pressure. What this person did cheapened the institution to a degree which is breathtaking."

Again this is only a draft opinion, not one approved by 5 justices, but a reflection of where Justice Alito believes he can convince them to do. 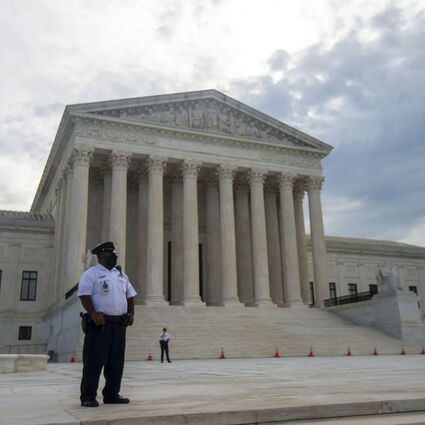 Police setting up barricades in front of the Supreme Court building in Washington DC on May 2, 2022, after a leaked opinion seemingly overturned Roe vs. Wade.

Supreme Court leaks are exceedingly rare. For a Supreme Court employee to leak a draft opinion; well, he or she would have to be highly motivated.

It's time to return this issue to the States, it says.

" The Supreme Court has voted to strike down the landmark Roe v. Wade decision, according to an initial draft majority opinion written by Justice Samuel Alito circulated inside the court and obtained by POLITICO."

The draft opinion "is a full-throated, unflinching repudiation of the 1973 decision which guaranteed federal constitutional protections of abortion rights and a subsequent 1992 decision – Planned Parenthood v. Casey – that largely maintained the right. "Roe was egregiously wrong from the start," Alito writes." https://www.politico.com/news/2022/05/02/supreme-court-abortion-draft-opinion-00029473