She tries to establish herself as the victim and him as the perpetrator. Few on social media are buying it 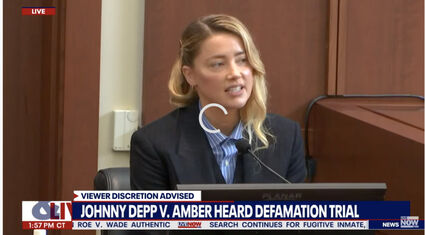 Amber Heard on the witness stand

5.4.22: Actress Amber Heard made her all the following points as she took the witness stand in the defamation lawsuit filed by Johnny Depp. Direct examination:

1. At first Depp was very nice at first and gave her father gifts. But he would change later escalating over time.

2. During the filming of Rum Diaries, he kissed me hard with his tongue. That was part of the script for him to kiss me but not like that. I was living with a woman at the time and he sent over gifts; books of poetry, wine, flowers, etc. She asked me, my partner what I should do with the gifts. I said send them back and first but over time found myself falling in love with him.

3. He drank copious amounts of tea which I thought was the man really loved his tea. But it was because of liver problems connected to his addictions.

4. I asked him about the tattoo on his arm and I thought it was just "Wino" tattoo. I thought he was joking because it didn't look like that at all. He slapped me across the face when I asked about it. I laughed because I didn't know what else to do. I thought this must be a joke. I just starred at him

6. I wish so much he had said he was joking. I was sitting on the dirty carpet, and I didn't know what else to do. God I thought did he just hit me? No!" He called me a cunt a whore and a bitch.

7. Later he would become the kind, warm, generous, man that I loved.

8. He was crying he seemed so sorry. But I didn't just forgive him. I got up and walked to the car but I didn't say anything. I sat in my car and I felt like I sat there forever I just leaned my head against the window. I saw my breath against the windshield. Trying to will myself to have the strength to know what I should do in this moment. Because I was heartbroken. I eventually turned the key and drove home.

9. He apologized the next day and came over with gifts a couple cases of expensive wine I could never have afforded at that time. He convinced me athat we were again in an upswing. We would go back to that sickly sweet velvety love.

10. Then I would go to an audition and when I came back he started to accuse me of cheating. He would punch the walls above my head in 2012 when he was drinking. "That's crazy you're wrong," I would say

11. Things would escalate to the point where he would shove me and push me down. I made a point of getting up and looking him in the eye. He'd ask me if I wanted to go again then just hit me, when I denied having an affair with my ex wife. He slapped me across the face. "Johnny! You hit me" I would say.

12. Picture exhibit 1783 "This is an accurate picture of me after being abused by Depp" Heard said.

13. In 2012 the violence was walking on egg shells sort of thing. It would shift from a rumor he had heard I was standing too close to a man; then he would explode. Screaming at me, destroying property. He would smash things around me and then just slap me. Hold me in a position and slap me multiple times in a row.

Was Johnny Depp taking notes or hanging his head during Amber Heard's testimony?

14. Later I would try to get his hands off of me. My defense was to go some other place. I'd stand up and look at him. Later I adopted other strategies to try to deal with it. I walked out and said I was going to get out of this relationship. He would say I got a chip I'm doing this program I'm done with drugs and alcohol. Ending any relation ship is hard but when He would come back he would be extra nice and swear he was done with drugs and alcohol. But eventually he would get bored and start drinking again.

15. Johnny on speed or alcohol or opiates was all very different I would have to pay attention to the different patterns.

16. I told my therapist and my mom. Exhibit 150 authenticated.

17. "where are you hiding it!" he shouted at me. Why would I hid anything from you, Johnny? I said. He ripped my dress off, a pink dress I had just died. I just stood there while he did that. He twisted his fingers around inside me, looking for the drugs..... I don't know how we went to bed that night.

18. The next morning they woke up in the fancy trailer park where they were on vacation. "He acted like nothing had happened. We went for a walk, my dog stepped on a bee." This is May 2013.