Ukraine Military Retracts Claim to Have Sunk a 408 Foot Frigate, the Admiral Makarov, in the Black Sea 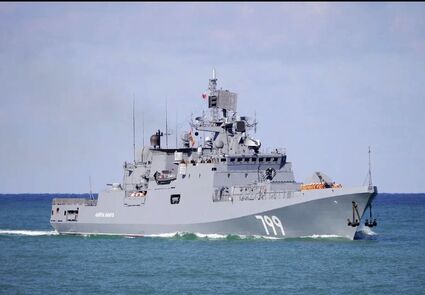 Ukraine Appears to Have Struck a 400 Foot Frigate, the Admiral Makarov, in the Black Sea

Update 5.7.23 an advisor to Office of the President of Ukraine Oleksiy Arestovych said that the report was a 'misunderstanding', and that the vessel attacked near Snake Island was actually a Serna-class landing craft, apparently hit by a missile launched by a Baykar Bayraktar TB2 drone.

5.5.22: Forbes describes her as "the juiciest target in the Black Sea." At 408 feet in length, Admiral Makarov is the newest of three modern frigates run by the Russian Navy, which features a lot of very old ships and a handful of newer ones. The Ukraine Navy says it destroyed the Admiral Makarov using Neptune missiles on Thursday.

The Ukrainian military said on 6 May that the Makarov had been struck by a Ukrainian R-360 Neptune anti ship cruise missiles. Dumskaya, a Ukrainian-state news site, said Russian forces had sent helicopters to rescue the crew of the ship. So far, neither Russian nor Western military forces have publicly confirmed that Admiral Makarov has been hit.

While still unconfirmed, a Russian rescue ship (SPK-46150) was dispatched to the location the Admiral Makarov was said to be burning. This is what one would expect the Navy to do in such circumstances. The Russian Navy continues to deny the story.

The flagship of the Russian Black Sea Fleet, with a crew of 510, the Cruiser Moskva was considered the most powerful warship in the Black Sea region. Ukraine hit and sank her with 2 Neptune missiles on April 14, 2022. Moskva was twice as big in length and tonnage as the Admiral Makarov. Moskva carried a crew of 510 crew, while Makarov carried about 200 men. 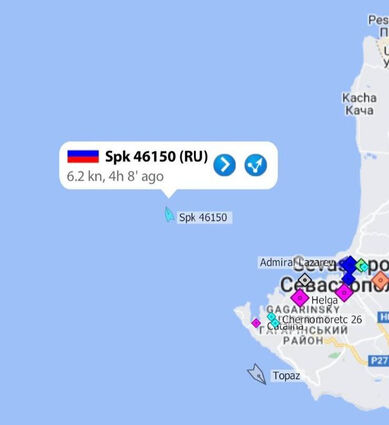 Russian navy launches rescue barge from Sevastopol at 9:43 pm local time, on May 5th 2022. This is a hint a stricken ship was present there.

Russia's Ministry of Defence has never admitted Ukraine sank the Moskva. The MOD at first denied any problem with the Cruiser, later attributing the ship's loss to a fire or a storm.

Admiral Makarov is an Admiral Grigorovich-class frigate of the Russian Navy, part of the Black Sea Fleet based at Sevastopol. She was laid down at the Yantar Shipyard in February 2012 and commissioned on 25 December 2017, says Wikipedia. Currently the most recently built of her class, she is the third of six planned ships of this class. She carries 8 cruise missiles, such as the Tochka, and also 24 surface to air missiles.

In 2022, the Admiral Makarov – along with the Admiral Grigorovich and the Admiral Essen – took part in the Russian invasion of Ukraine, adds Wikipedia.